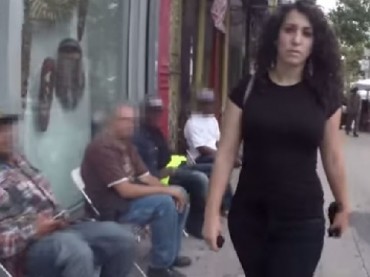 OPINION: Instead of hurling victimhood all over the Internet and our college campuses, what if we told men what we wanted?

In late October, actress Shoshana Roberts walked New York City for 10 hours and filmed the catcalling she experienced. The two-minute video shows men ogling her, asking for her number, or otherwise soliciting her attention as she sulks silently through the streets.

The video, posted in late October, has garnered some 38 million views and become one of the most talked about videos of 2014. Responses to the two-minute social experiment have been mixed.

Some applauded Roberts – yes, street harassment is a big deal, they say. Women don’t feel safe, men aren’t being respectful, this must stop.

Some mocked her – “you were asking for it.” Or, “attractive men get harassed in New York City too.” And, “come on, it’s a compliment. He said you were beautiful.” “Consider yourself flattered, and go on with your day.”

As the problem of street harassment gains steam, a relatively new feminist campaign has been rising in popularity at U.S. colleges.

You may have seen the posters on your campus – a wary female face staring coldly at you from a black and white placard. The caption beneath the face says “stop telling women to smile.” Or it might say, “I am not a princess.” “Men do not own the streets.” “I am not here for you.” Are you the girl who’s gotten unwanted attention from a man on the street? Maybe you’re about to put up a poster of your own. You’re mean and lean and you won’t be spoken to like that.

Stop right there, dear. Have we thought about the message we’re sending?

Oh, don’t get me wrong. Women deserve to walk the streets without receiving sexual comments from strangers. We deserve to be respected no matter what we wear or where we’re coming from or what time it is.

But there’s a bully here, so we have to be savvy. We have to play our cards well. We want to succeed, not just for ourselves but for the next girl who walks down this street and runs into that man. We want to live in a culture where men and women respect each other, in public and private.

Why Is he Catcalling?

So let’s beat this fellow at his own game. To do that, we have to know how he thinks. When a man catcalls a woman, what does he really want?

Men have a deep desire to please and to be noticed by women, just as women want to be noticed and cherished by men. The men who catcall women? They are expressing a primitive form of this desire for attention. They probably don’t know how to earn admiration, so they think being pushy is the way to go.

They’re clueless, of course. Some of these men had a love interest that ended badly – or a lot of them that ended badly – and they’re hurt. But they still like to think that they can make a girl’s head turn, so they’re trying to turn ours.

The catcaller may have started out wanting a good thing – I mean, we’re pretty awesome, right? – but somewhere along the way this man went seriously wrong and now he’s just a public nuisance. At the very least, he makes us feel unsafe. Worse, he might actually be unsafe.

So what are we going to do? Show him our muscles and scare him? Show him that we’re meaner and leaner and tougher than he is? Cause that’ll show him. He’ll wake up the next morning and he’ll just be Prince Charming!

If we tell men that we’re tough and we want to fight, all we’re going to get is a fight …probably a big, messy one. But do we want a fight? I thought all we wanted was a world where men and women respect each other?

What if, instead of telling men what losers they are, and what bad style they’ve got – what if we tell them how to succeed?

Of course we should dismiss ogling strangers in the street. But I’m talking about what we do when we get home.

What Do We Want?

On which note, do we know what we want? To be respected, of course: to be treated like something precious instead of something for sale. A stranger could do that in a number of ways without being creepy – maybe he’d just flash a straight-up friendly smile as a girl walked by. Or open a door. Or respond politely when a woman needed something.

There’s nothing inspiring about being a victim. Nothing helpful about choosing resentment. That cold bitter face on the poster, that embittered girl stomping down the street and daring someone to speak to her – is this who we really want to be?

Instead of glaring at people on the street and yelling “don’t tell me to smile!” our lives should communicate what we do want. Do we want gentlemen? Then we need to stop giving the bad boys attention and make gentlemen the heroes in the stories we tell.

Like the rest of humanity, men want to be admired. When women make it clear that they admire respect, more men will give respect a try.

When our culture makes it clear that good guys actually finish first, more men will choose to be the good guy.

And On Another Note

I do wish Shoshana Roberts had spent 10 hours of her life – and the time of 38 million YouTube viewers – raising awareness about women raped by ISIS terrorists. These are the real victims. Crass comments from strangers are frustrating, but we need to remember that this is not the ultimate tragedy.

But meanwhile in America, women are sometimes harassed by fools. We deserve better, way better. But their ignorance must not be our excuse to shut off the light and withdraw. The world doesn’t need more sullen people. It needs more vibrant ones. No need to have a chip on your shoulder, sister.

Smile, princess. Because you are loved and created with a purpose, beautiful since you were born. You’re here to make the world a better place.

Let’s avoid the temptation to glare people down with our lives. Let’s inspire the best in them. Let’s tell men what we want, and give them a chance to make us proud.