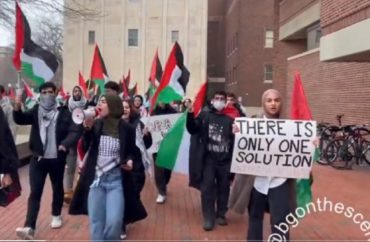 Palestinian student activists at the University of Michigan protested Vice President Kamala Harris’ speech on Friday with calls of “intifada” and accusations that the Biden-Harris White House supported “genocide.”

“Long live the intifada,” activists chanted as they marched to Harris’ speech. “There is only one solution, intifada revolution,” the group chanted. “From the river to the sea, Palestine will be free.”

“Intifada” refers to Palestinians waging an armed rebellion against Israel and establishing the state of Palestine. The activists were members of Students Allied for Freedom and Equality, which is the Students for Justice in Palestine chapter at the Big Ten university.

The phrase “from the river to sea,” refers to the elimination of Israel and giving Palestinians their own state that extends “from the Jordan River to the Mediterranean Sea,” according to the American Jewish Committee.

“It is also a rallying cry for terrorist groups and their sympathizers, from the Popular Front for the Liberation of Palestine (PFLP) to Hamas, which called for Israel’s destruction in its original governing charter in 1988,” the ACJ explained on its website.

While this is the “solution” advocated for by the activists, many on social media replied to the video and noted it bore a striking resemblance to Adolf Hitler’s “final solution” to kill all Jewish people.

“Hey, hey, ho, ho, the Zionists have got to go,” activists also chanted, in reference to supporters of Israel and a Jewish state.

Pro-Palestine protesters gathering ahead of Kamala Harris’s visit, in opposition to her support of Israel pic.twitter.com/35D0ngLKNe

The group criticized Harris for supporting Israel and accused the country of harming the environment. The vice president was on campus to talk about climate change.

A leader accused Harris of “hypocrisy” of “leading the fight against climate change” while she “continues to unapologetically support the violent Zionist entity.”

“Time and time again, Kamala Harris has proven herself a detriment to the marginalized communities she claims to represent,” another speaker said.

“Time and time again, Kamala Harris has proven herself a detriment to the marginalized communities she claims to represent” Speeches at today’s protest of Kamala Harris’s visit to the University of Michigan pic.twitter.com/aviF9WUitB

Pro-Palestine protesters marched away from the auditorium and through downtown Ann Arbor after VP Harris’s event pic.twitter.com/ljtl6OWX1M

The protest continued through the streets of Ann Arbor.