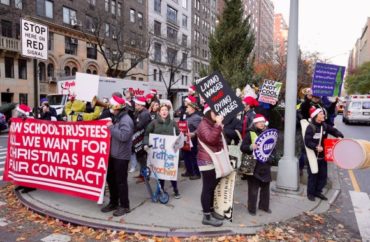 Part-time faculty at the New School, a private liberal arts university in New York, ended a three-week strike over pay and benefits after receiving concessions from the university on Saturday.

“We have countersigned a tentative agreement and the strike is ending,” UAW Local 7902, the union representing The New School and New York University, tweeted December 10.

You heard it here first: We have countersigned a tentative agreement and the strike is ending.

We look forward to returning to our students. pic.twitter.com/IKk27DXEt0

“We look forward to returning to our students,” union members tweeted.

Nearly 90 percent of the faculty at the New School are untenured, adjunct professors and lecturers, so their walkout “had left the school at a near standstill,” The New York Times reported

Union members told The New York Times that their pay was still not comparable to their peers at similar institutions in New York, but the school had granted their health insurance demands.

Their new contract would raise pay by 13 percent in the first year for the best-paid adjunct teachers, The Times reported. “An adjunct being paid $5,753 over a semester for a three-credit course — the ceiling until now — would earn $6,520,” according to The Times.

The striking teachers stated that they had received only a small increase in salary over the previous years that did not match inflation or assist with the difficulties of the pandemic, according to The Times. They also argued that the university paid out too much money in administrator salaries.

“The school had also been facing a lawsuit from irate parents, who had threatened to withhold payment or force their children to transfer to other institutions,” The Times reported. Some parents had called for the resignation of the school’s president, Dwight McBride.

The university had paid wages and healthcare premiums for striking employees for most of the the three weeks the workers were off the job, but it cut them off near the conclusion of the strike.

On December 5 it “made the difficult decision to stop paying wages and premiums for healthcare benefits for employees who are striking,” according to a university news release.

The union represents about 2,600 part-time faculty at the school, including about 1,500 who taught this semester but walked off the job on November 16, according to TruthOut.

The unionized faculty confirmed that they had reached an agreement on Saturday and made further demands for the students who had participated in the strike.

The total cost to attend the New School, including tuition, fees and living expenses, was $78,744 in 2021-22, according to the National Center for Education Statistics. However, students typically pay less when financial aid is factored in, according to Tuition Tracker.