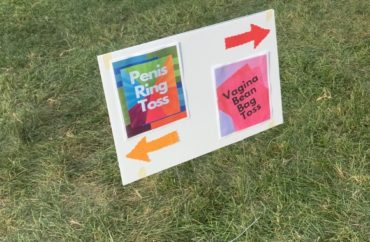 FAIRFAX, Va. — A penis ring toss, vagina bean bag toss, and lubricant taste tests were just a few of the activities students at George Mason University took part in Tuesday night at a “Consent Carnival” hosted by the Student Support and Advocacy Center.

The vagina bean bag toss boasted giant inflatable lips that served to mimic a “vagina,” and students could throw large pink bean bags into it. The game doubled as an educational display, informing students on flyers that “not all people with vaginas are women.”

“Genitalia is not an indicator of gender and it can be harmful to assume so,” the display added. Other information provided included the number of nerve endings on the clitoris (8,000), how the labia comes in different colors (“light pink to dark brown”), and the fact that the vagina is self cleaning. 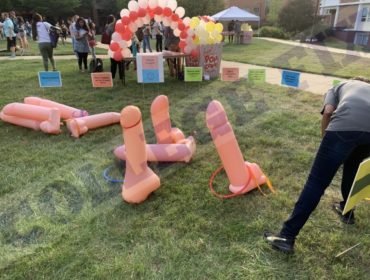 As for the penis ring toss, the educational component to that game was that the eight or so three-foot-high penis inflatables were surrounded by signs on how to correctly use a condom, among other information.

Meanwhile there was popcorn and candy for students to nibble on. They were also offered tastings of various lubricants. The flavors included cupcake, watermelon and green apple.

Additional stations at the carnival included the “gender unicorn” booth, which helped teach students how to properly react to friends coming out as LGBTQ. There was also an “affirmative consent kissing booth” and a “you mustache for consent” table that sought to teach students how to get verbal consent before and as they engage in sexual activity.

“Condom balloon pop” and “don’t touch my hair” booths were also offered to the crowd, but many students flocked to the face painter and snowcone machine, which appeared to be the biggest hits at the event. (The face painter told The Fix students were not asking for sexually explicit images.)

And no carnival would be complete without a balloon artist. Several students could be seen walking around holding giant, flesh-colored penis-shaped balloons.

John Cicchetti, associate director of the Student Support and Advocacy Center, told The College Fix that each station at the carnival is meant to be “presented in a fun and interesting way to attract students but also educate them.”

When peppered with questions about the reasoning behind the fair, Cicchetti said the event was not a result of an incident on campus but geared toward educating the entire university community.

Maggie Olszewska, director of the Student Support and Advocacy Center and the facilitator for the “gender unicorn” station, told The College Fix the carnival represented “proactive education.”

When asked about her station and the current number of genders, Olszewska stated that she didn’t know the exact number, but that all genders should be accepted.

The Fix asked both Olszewska and Cicchetti about funding for the event, but neither could identify the exact source and suggested reaching out to university leadership.

Student volunteers from the event included representatives from the George Mason student government, Patriots for Choice, and the GMU Student Support and Advocacy Center. Signs at the event stated it was co-sponsored by the Woman and Gender Studies Department, Student Health Services, and Patriot Experience.

The “consent carnival” at George Mason University took place about two weeks after it hosted an event called “Sexual Chocolate,” which taught incoming freshmen sexual education with chocolate treats and chocolate information laced throughout the presentation.

MORE: College students given five-step checklist on how to kiss without committing sexual assault

IMAGES and VIDEO: Zach Petrizzo / For The College Fix