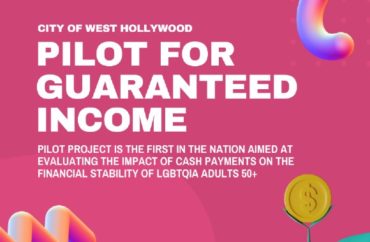 Applications are still under review for the ‘guaranteed income’ program

The city of West Hollywood has teamed up with the University of Pennsylvania’s Center for Guaranteed Income Research to give free money to poorer LGBTQIA residents.

The city has not made a decision on applicants for its universal basic income pilot initiative according to a city spokesperson. Only 25 citizens will receive the money.

“At this time, the City of West Hollywood’s Pilot partners, National Council of Jewish Women/LA and Center for Guaranteed Income Research, are in the application assessment phase of the Pilot,” city spokesperson Sherri Lunn said in an email to The College Fix on April 27. “The timeline for this phase has been extended to ensure completeness, accuracy, and the highest degree of rigorous assessment.”

“The West Hollywood Pilot for Guaranteed Income is part of an emerging area of policy-making and fund distribution and there are many nuanced components,” Lunn said. “The City and Pilot partners, appreciate the patience of applicants and of the community at large so that the Pilot can be successful.”

Lunn did not answer questions about the source of funding for the pilot, how the city determined the criteria for funds and potential legal issues from discriminating against people on the basis of sexual orientation.

The city first announced it would take applications in February. Its website cited research from UCLA’s law school that found “LGBT older adults are financially less secure than their non-LGBT peers due to lifelong disparities and barriers to accessing programs that support aging adults”

“[T]he national poverty rate for LGBT people is 21.6 percent as compared to 15.7 percent for cisgender non-LGBT people,” the city said. However, the report also found that homosexual men had a lower poverty rate than heterosexual mean.

The Fix contacted Mayors for a Guaranteed Income and the National Council of Jewish Women Los Angeles with similar questions about funding and legality in the past week but did not receive a response.

The mayoral advocacy group partnered with Penn to create its center in 2020 with the explicit goal of finding data to support universal basic income.

The purpose is to “allow the organization to layer data with anecdotal evidence in federal advocacy” and “address knowledge gaps in the contemporary understanding of guaranteed income’s impact for Americans.”

“MGI member mayors are signing on to the learning agenda with an eye towards moving the needle on poverty,” the group stated. The other goal is to meet “the urgency of our current economic moment with evidence-based policy proposals.”