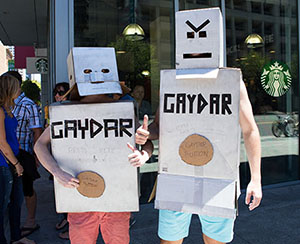 The Daily Pennsylvanian has one of the creepier articles I’ve seen on college applications: Admissions officials are actively trying to guess who is gay, lesbian, bisexual, transgender or “ally” (think Alec Baldwin) based on their applications.

It’s not clear why – Penn can’t legally use a quota system to reach a certain number of non-heterosexuals with or without their birth genitals intact – but it sounds like the school has a pretty developed system:

Jordan Pascucci, Office of Admissions Associate Dean of Recruitment, specifically trains admissions staff on how to “read” LGBTQ applicants’ applications. Unlike ethnicity, the Common App does not have a section to specify an applicant’s sexual orientation. …

Bob Schoenberg , the director of the LGBT center, said that he wants admissions officers also to be aware of more subtle indications of LGBTQ identity in applications. “We realized that there must be applicants who are self-identifying in some ways that we weren’t noticing,” he said. “It is not always as explicit as saying ‘I’m gay.’”

As a private school, Penn’s internal admissions notes probably aren’t accessible under state or federal open-records law, but it’s still worth The Daily asking for records showing what exactly admissions officers consider “gay” and how that affects applicants’ chances. (Statements like “I won a decorating award” or “At this flannel party I hosted”? Maybe “I fooled around with my bro and it wasn’t as weird as I thought it would be”?)

As long as names, grades and other identifying details are redacted, there shouldn’t be any privacy issue with revealing what admissions officers are marking on applications. It’s certainly not covered by the Family Educational Rights and Privacy Act, though I’m sure Penn would raise that baseless defense.

What we do know is that Penn’s system, which targets “active” LGBTQ students for admission, is working as intended:

So many wonderful opportunities for records requests by enterprising student journalists – or education beat writers.