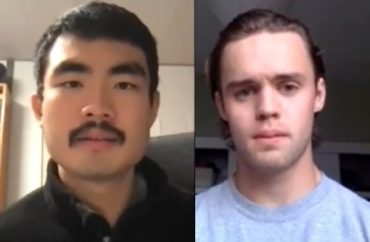 The apology did not satisfy the activists

The leaders of Harvard University’s Undergraduate Council issued an apology for their past use of the words “defund” and “abolish.”

President Michael Cheng and Vice President Emmett de Kanter (pictured) used the words during their campaign for student government in December 2021. The pair said they wanted to “Defund the UC.”

They ran on a platform of defunding and abolishing the current student government due to allegations of corruption and misconduct, though an ongoing audit has not uncovered any problems.

But black activists successfully bullied the pair into apologizing for using the terms – now they will use “reimagine.”

The use of these words “trivializes the struggle of Black Americans,” Know Your Vote, Harvard wrote on its Instagram last week. “To equate a student government to an oppressive force commodifies experiences of minority students across campus.”

“This message is overdue and we apologize for that,” de Kanter said in the video, seen below. The audio syncing problems are original to the Instagram video.

Cheng said black activists have “rightfully raised concerns about our use of the words ‘defund’ and ‘abolish.’”

“These are words that have been used, and continue to be used, by organizers, especially black organizers, fighting for their lives and lives of those they care about,” de Kanter said.

The president and vice president apologized for not “think[ing] through the implications wrong with that [unintelligible],” de Kanter said.

“And we’re sorry that it’s taken so long for us to apologize,” Cheng said.

Even though the apology cannot “heal the hurt this language has caused,” de Kanter said he hopes it is “a step forward.”

“We’re going to do the right thing,” Cheng said and announced he and his vice president would use the term “reimagine” instead.

The groveling to the woke mob did not help though.

“You are apologizing because it is politically convenient. Not because you care,” Know Your Vote, Harvard wrote on its Instagram account. While the activist group said it appreciated the apology, it is “hesitant to believe the genuineness of the apology.”

The group alleged that the student leaders were just apologizing due to a pending vote on a new structure for the Harvard Undergraduate Council. It urged a boycott of the referendum.