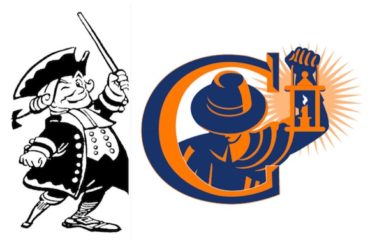 The elite $60,000 per-year Collegiate School in Manhattan is updating its mascot, school seal and motto so as to be more inclusive.

According to the New York Post, the school — which boasts alumni such as John F. Kennedy Jr. and David Duchovny — is following recommendations of a three-year discussion and a 400-plus page report.

The report proposed “drastically altering” the  “Dutchman” mascot (see at right) and excising religious terms from the school seal and motto.

This allegedly herculean task required a task force of 17 people (including David Letterman’s wife) to “combat within Collegiate the institutional and other racism that pervades so much of our society.”

The “Report of the History and Symbols Task Force” said one of the problems with the Dutchman was its “male-centrism,” but the school’s faculty and staff were much more worried about that than others involved in a survey.

While the school ultimately decided to keep the Dutchman, it noted a pair of “strong caveats”: Collegiate must “actively engage with its history […] so that our community (particularly students) understands ‘Dutchmen’ in a more complete and historical context.”

This includes the fact that “the Dutch West India Company was a slave trading company,” and that slaves were not permitted to be baptized as Protestants.

In addition, the Dutchman image required a redesign as some associate it with Peter Stuyvesant, “a vehement anti-Semite […] ruled by hate and racism.” The task force admitted there is no definitive affirmation the mascot is modeled on Stuyesant, “[y]et, Stuyesant’s renown as an iconic Dutch colonist and the existence of a Peg Leg makes it a distinct possibility, if not likely, that he is the inspiration …” 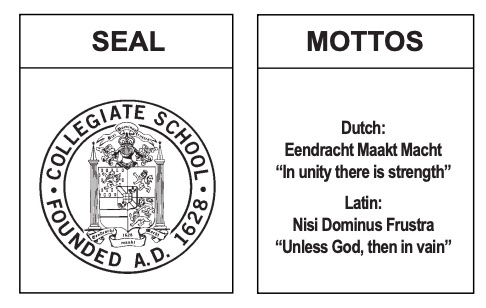 As for the school seal and motto, the report recommended removing “A.D.” — anno domini, Latin for “in the year of our Lord” — from the school’s year of founding as Collegiate now is “comprised of people from various faith traditions as well as those who do not consider themselves people of faith.” Not to mention, in the past Christians had “proselytiz[ed] Native Americans and others” to their faith.

Also recommended was  changing the Latin motto of “Nisi Dominus Frustra” (“Unless God, then in vain”) due to the word “God.”

“We are no longer explicitly a religious school,” the report stated. “We are more than that.”

The task force said it drew opinions on the branding remake from parents, alumni, students and faculty.

Responses to the changes ran the gamut, with some ripping the Dutchman figure of Stuyvesant as a racist anti-Semite, while others argued that severing such links with the school’s origins was misguided.

“This community worked diligently to design a process that was inclusive of our community, fully aware that a change such as this would garner a range of reactions,” school leaders wrote in last week’s message to parents.

Some Collegiate families argued that the lengthy process was indicative of the school’s embrace of woke priorities.

A parent said some faculty members led the push for a new identity and that parental interest in the overhaul was limited.

But others backed the new approach, saying the school — considered one of the best prep campuses in the country — had a responsibility to change with the times.

“The kids don’t have the same perspective as a lot of their parents,” a Collegiate mom said. “I think the administration is walking a thin line trying to keep everybody happy.”