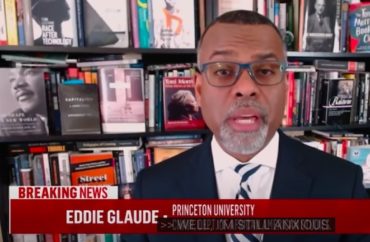 Princeton African-American Studies Professor Eddie Glaude was back at it the morning after Election Day, brandishing his usual rhetorical weapons of racism, whiteness and patriarchy this time as the culprit for the neck-and-neck presidential race.

As reported by Newsbusters, when asked on “MSNBC Live” why Joe Biden/Donald Trump race was so close, Glaude told host Craig Melvin it was because “whiteness still animates the core of this country along with selfishness.”

When queried by Melvin about Trump’s distinct inroads among black and Hispanic voters, Glaude brought the expected and changed the subject:

Remember — even after it was shown the boys from Covington High School were not the instigators of an engagement with an elderly Native activist, Glaude said the boys were the beneficiaries of “white privilege” and that their MAGA hats “invite confrontation.”

Glaude also blamed “whiteness” for the 2019 New Zealand massacre, and once referred to a Trump tweet about deporting illegal immigrants as a “terrorist act.”