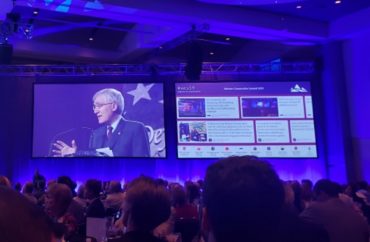 As a survivor of the Communist Holocaust I am horrified to witness how my beloved America, my adopted country, is gradually being transformed into a secularist and atheistic utopia, where communist ideals are glorified and promoted, while Judeo-Christian values and morality are ridiculed and increasingly eradicated from the public and social consciousness of our nation. Under the decades-long assault and militant radicalism of many so-called “liberal” and “progressive” elites, God has been progressively erased from our public and educational institutions, to be replaced with all manner of delusion, perversion, corruption, violence, decadence, and insanity.

It was this quote which Princeton University Professor Robert P. George cited on Saturday to offer his own warning on the state of America today.

“Thirty-six years later, who can deny the truth of Solzhenitsyn’s lament,” George asked as he gave a speech to the thousands who’d gathered for the annual Western Conservative Summit conference in Denver.

“Today the culture despisers of religion and Judeo-Christian values do not speak ordinarily of communism or its ideals … they speak instead of liberation, or equality, or socialism, or social justice, by which they seek to marginalize and stigmatize the principles of Judeo-Christian morality,” George said.

To combat this, conservatives must engage with courage, a virtue that has fallen short among far too many nowadays, the professor said.

“The virtue we lack today, I submit to you my friends — the virtue we lack, and it is an indispensable one — is courage,” George said. “And we must recover it. … We must not permit ourselves to be intimidated, to be bullied by a cultural elite or by anybody else, into silence or acquiescence with what we know to be wrong.”

To defend a historic perception of marriage is to be accused of hatred, to stand up for the sanctity of life in all its stages and conditions is to risk being labeled a misogynist, and to speak out for religious freedom and conscious is to invite being referred to as a bigot, George said.

George acknowledged it is not easy to suffer such “abuse” and “defamation,” noting it places jobs, relationships, businesses and much more in jeopardy. But the more people stay silent, the bigger a problem it becomes, he said.

“Anyone who succumbs to the intimidation and bullying, anyone who acquiesces or goes silent out of fear, not only harms his or her own character … he or she also makes things harder for others,” George said. “We owe it not only to ourselves to be courageous … we owe it to God.”

But the problem is, like Solzhenitsyn’s warning of the past, men have forgotten God, and instead they worship themselves, George said.

“Faith alone can overcome fear,” the professor said, prompting another round of applause.

George gave the nearly 30-minute speech as he accepted the 2019 William L. Armstrong Award. George is the McCormick professor of jurisprudence and director of the James Madison Program in American Ideals and Institutions at Princeton University.

MORE: George on intellectual and ideological diversity in the academy