Dinkel added the text “Time to take the trash out! Hope over fear, Truth over lies wins.”

As word spread of the tweet, angry members of the pro-Trump community, including many students, decided to show up at the Jefferson HS parking lot with “full-size” Trump flags adorning their vehicles. 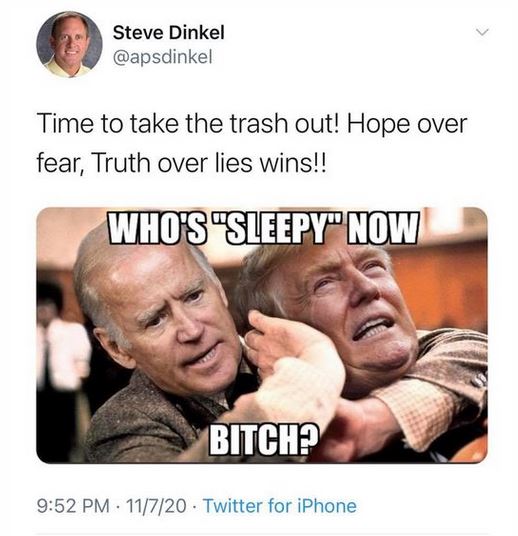 Despite such an unconstitutional policy, students moved their vehicles to an adjacent street. But, by afternoon the Trump flags had been removed.

The pro-Trump (counter-)protest was viewed by some individuals as threatening. For example, community member Kat Lopez posted to Jefferson’s Facebook page “What will your administration be doing to make sure all students of color feel safe at their school after this incident at the high school this morning?” 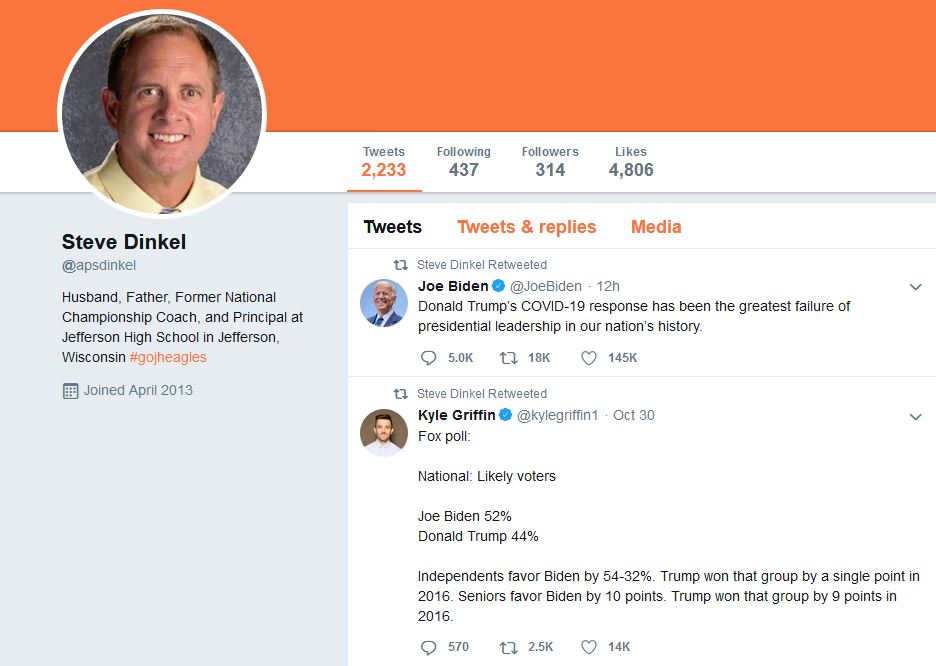 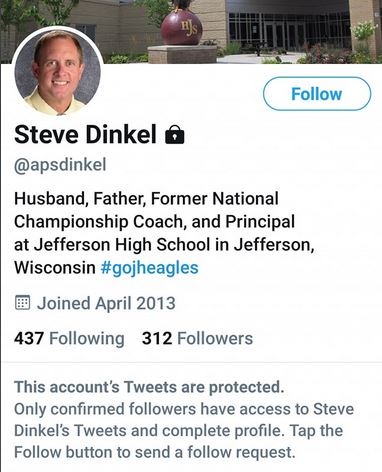 But others countered Lopez, asking why Dinkel is permitted to tweet what he did, yet students can’t fly Trump flags on their cars.

At a November 9 school board meeting, community members demanded to know what the school and district were doing about the controversy. School Board President Donna Bente said the matter was “being looked into at this time.”

Somewhat ironically, that same day the Jefferson Facebook page posted about “World Kindness Week.” The only viewable comment to the post asks “Will the principle [sic] and staff be attending[?]”

The Union reported Thursday that Dinkel had been placed on administrative leave. In a press release, Superintendent Mark Rollefson said

The district has received numerous inquiries and complaints about the posting from concerned parents and other district constituents. The district respects these concerns. The district also expects that district leaders will conduct themselves in a manner that gives the public we serve confidence in the district’s professionalism and assures all students that they will be treated fairly regardless of their political beliefs or expression.

The report notes that while “there are extensive policies regarding official [Jefferson] school district communications and social media accounts,” it is unaware how, or if, these apply to personal social media pages.

It appears Dinkel at first protected his Twitter account (see above) when the controversy surfaced, but then deleted it altogether. A Google cache version shows Dinkel’s tweets and retweets to be quite progressive in nature (which is perfectly fine, by the way), including many from Joe Biden and groups like the Lincoln Project.

In response to a query about the imbroglio, The College Fix received an automated “out of office” reply from Dinkel.

UPDATE: Superintendent Rollefson contacted The Fix on November 18 to note the district cannot comment on Dinkel’s situation as it is under investigation. However, he did say the district “has not and does not limit students’ freedom of speech.” Students are permitted “to wear face coverings, T-shirts, and have flags on their vehicles in the parking lot supporting one candidate or another.” Only one Trump flag was taken down on the day in question, he said; that was because it was 30-feet high and was “top-heavy on a windy day.”