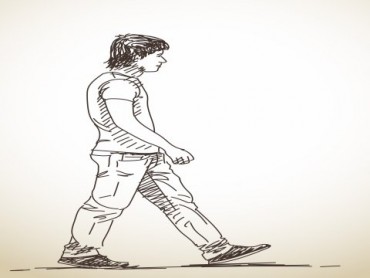 I was struck last evening by an … “exercise” at the University of Michigan highlighted by National Review’s Kat Timpf: the “Privilege Walk Activity.”

I was fascinated because I had to endure this very nonsense a bit over a decade ago.

Check out just what involved in this silliness courtesy of UM’s Edward Ginsberg Center. (I’ve selected some random statements from the list and added my own reactions in italics.)

Participants stand in a straight line in the middle of an empty room. Tell participants that some statements might be of a sensitive nature for some individuals, and that they do not have to respond to any statement that is uncomfortable. Read the statements below.

If there were more than 50 books in your house growing up, take one step forward. (See below.)

If you believe that you were denied employment because of your race, gender, or ethnicity, take 1 step back. (“If you BELIEVE …” Not too subjective, eh?)

If you believe that you were paid less because of your race, gender, or ethnicity, take one step back. (Again, “If you BELIEVE …”)

If you were ever stopped or questioned by the police because of your race, take one step back. (Huh? “Excuse me, sir. I pulled you over because I noticed you are black …”)

If you have ever felt uncomfortable about a joke directed at your gender, take one step back. (If any males stepped forward, you can bet they were met with ominous glares.)

If your parents or guardians attended college, take one step forward. (See below.)

If you can legally marry the person you love, take one step forward. (Um, they might want to update this question after the events of last summer …?)

If you are reasonably sure that you will not be denied access to jobs or political resources because of your gender, take one step forward. (There’s that subjectivity again — “reasonably sure …”)

If you are reasonably sure you would be hired based on your ability and qualifications, take one step forward. (Wait — wouldn’t this contradict proportionate representation and/or “proper” racial/ethnicity percentage hiring efforts?)

If you can buy new clothes or go out to dinner when you want to, take one step forward. (See below.)

If you attended private school or summer camp, take one step forward. (See below.)

As might be expected, there is the obligatory disclaimer at the bottom:

IMPORTANT: This exercise can be very triggering, so do not do this activity unless you are sure you have plenty of time to debrief and reflect what individuals experienced during the privilege walk.

Regarding the exercise, Michigan says that “[e]very statement addresses some small privilege that is based on gender, race, ethnicity, class, or sexual orientation.”

No, it doesn’t. Some of these can be attributed simply to smart, frugal planning and determination.

For example, neither of my parents went to college (they married at age 20 and 18 respectively). Yet, our house had way over 50 books in it when I was growing up. It wasn’t because my sisters and I were “privileged,” it was because my parents, despite lacking college, weren’t stupid. They knew that education is important, and took steps accordingly.

Similarly, look at the second-to-last on the list above. Is that due to being fairly well-off, or to … wise financial discretion?

The same applies to the last one — is a family which sacrifices certain (or many) things to save for a private or parochial education “privileged?”

Hardly. It’s just smart. (Most especially if the local school system is a mess.) Not to mention it is determined, goal-oriented, and many more adjectives never to be considered by politically correct agents like those at the Edward Ginsberg Center.

I’ll never forget the brief conversation I had with a co-worker (an African-American woman) on the way to participate in this nonsense many years ago:

Me: “Yes, absolutely. I certainly think so!”

Co-worker: “Me too. So what the hell are we doing this for??”