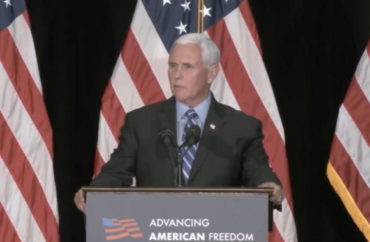 The Stanford University student government has voted against approving a $6,000 grant request from the College Republicans to help host former Vice President Mike Pence for a campus speech.

The Monday vote was 7 in favor, 7 in abstention, and 1 in opposition, a combination that fell short of the eight votes needed for the request to pass, said student Stephen Sills, former president of the GOP group and its current spokesman.

Sills, in a statement, likened his peers’ decision to campus cancel culture.

“Stanford’s student government is now illegitimately attempting to stop the event by denying funding for the lecture,” he said, adding left-leaning student leaders are “dedicated to preventing their fellow students from hearing conservative ideas.”

Sills, in an email to The College Fix, said there is no public record explaining why the students voted against the request, as the meeting was held in closed session.

“No other standard grant except our own was subject to this treatment,” he said.

The College Republicans are preparing to file a complaint against the student government to its Constitutional Council to have the decision overturned, he said.

It’s the same process the group took in 2019 when it secured campus funding for its Dinesh D’Souza talk after the student government initially rejected the funding request.

“The student senate is constitutionally obligated to provide us with the funding,” Sills said in his email to The Fix. “Resistance is futile.”

Meanwhile, Pence’s guest lecture, co-sponsored by Young America’s Foundation, is slated to take place in mid-February, and Sills said it will go on as planned.

Young America’s Foundation spokeswoman Kara Zupkus, in responding to the funding denial, said it was a case of “ideological preferences” over “promoting free speech on campus.”

“Vice President Pence’s pro-freedom message would inspire thousands at Stanford who are usually exposed to one single ideological viewpoint––a terrifying thought for the tyrants-in-training at Stanford,” she stated on YAF’s website.

Pence has visited a couple universities over the last month through YAF’s campus lecture series, drawing large and supportive crowds at campuses such as the University of Iowa and Texas A&M. He also spoke Oct. 28 at Patrick Henry College.

At his Nov. 11 talk at Texas A&M, he advanced liberty and freedom themes, the Battalion student newspaper reports.

“With your help, we will keep the torch of life and liberty alive because I believe yours is the freedom generation in America,” Pence had said.

As for the Stanford situation, an anonymous student senator quoted in the Stanford Daily campus newspaper said concerns expressed included questions over “safety of an event with more than a thousand people, potentially including people from outside of the campus community.”

“Moreover, the scale of the event makes this request for funding different from other grant requests, according to the senator,” the Daily reports. “‘No other student group that has requested funding from us has petitioned for an event of this magnitude,’ they wrote.”

Stanford representative Pat Lopes Harris told the Daily that campus leaders continue “to work with the Stanford College Republicans on its event plans.”