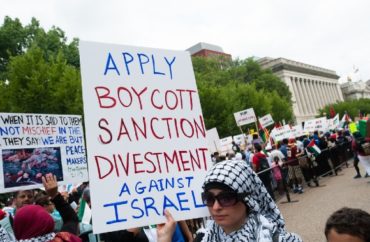 A student activist recently debunked the false claims pushed by Palestinian students who want to pass a boycott, divestment and sanctions resolutions.

Even though Arizona State University’s student government did not move forward on a Boycott, Divestment and Sanctions, resolution, which would call for the public institution to cut ties with Israel and companies doing business with Israel, the threat remains.

“If these students do not wish to study abroad in Israel, there is no one forcing them to do so,” Madeleine Steppel told The College Fix recently. “But denying the opportunity to other students is absurd. Israel has some of the most advanced counter-terrorism technology in the world, and they use it to fight actual terrorist groups.”

Students for Justice in Palestine wanted an end to a study-abroad program in the Jewish country, a condemnation of evictions and a prohibition on Israeli Defense Forces visiting campus.

Our press release regarding President Crow’s five days of silence since we, along with @asu_pcc and @az2palestine, reached out to him to support Palestinian students and their families. pic.twitter.com/yYIStzWrPH

The communications major at ASU said that Palestinian activists treat the territory as a country and fail to differentiate it from Hamas terrorists.

“Palestine is not a country and therefore does not have a military,” Steppel said. “Israel was fighting Hamas, which is a terrorist organization, not civilians.”

She also took aim at the claims that Israel illegally removed people from their residences in Sheikh Jarrah.

There was a decades-long court battle because Arab residents refused to pay rent. They were evicted because the law dictates that one must pay rent if one does not own the house, regardless of ethnicity. No one was a winner in this scenario. The owners weren’t getting the rent they were due, and now some people are without homes.

Steppel also pointed to a number of hypocrisies.

“If the students in these groups want to personally divest from Israel, they are welcome to try. But they also wouldn’t have been able to publish their letter in the first place,” the ASU student said.

“Everything from Intel processors in both Windows and Mac computers to the iPhone to SMS to 4G to Facebook to Video on Demand to an electric car to cherry tomatoes to cancer, HIV, and AIDS drugs to the Pillcam to all three Covid vaccines have been developed or invented in Israel,” Steppel said.

She said that it would be “ineffective” but also “antisemitic” for ASU to divest from HP and Caterpillar.

“They wouldn’t say we should divest from any other country or the companies who do business there; the only reason Israel is singled out is that it is the only Jewish state,” Steppel said.

She said that “Hamas, Iran, and the Palestinian leaders’ unwillingness to accept any deal that includes a Jewish state,” have blocked Middle Eastern peace.