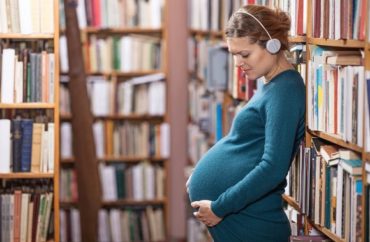 Pregnant students at risk of flunking classes because their schools don’t make accommodations for them have a new tool: the credible threat of a lawsuit.

The Alliance Defending Freedom will issue legal threat letters to public colleges that have allegedly discriminated against pregnant students, under a new Title IX awareness campaign by Students for Life of America.

Students recounted the hurdles they faced from their colleges during pregnancy in an SFLA webcast last week. One said her college refused to let her appeal the loss of her financial aid even though it knew she had failed her classes because of pregnancy. 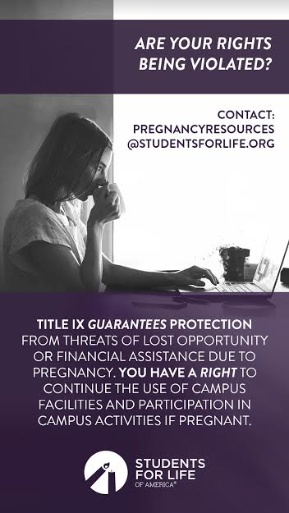 SFLA released a “Pregnant and Parenting Bill of Rights” as part of the campaign it launched last week, which also promotes its years-old Pregnant on Campus initiative. One goal of the initiative is to alert pregnant athletes, a high-risk group for abortion, about their Title IX rights.

“Lack of awareness of the rights of pregnant and parenting students is widespread, affecting many students and student athletes,” SFLA President Kristan Hawkins said in a press release.

“More than one in five students is raising a child, and of those, more than 70 percent are women,” she continued, citing an April study by the Institute for Women’s Policy Research.

“We and our allied attorneys will take steps to defend these rights if they are violated,” Kevin Theriot, senior counsel for Alliance Defending Freedom, told The College Fix in an email. The Fix could not arrange a further interview with the public interest law firm.

Convince schools to ‘reconsider their policies’ before litigation

SFLA said it will provide the alliance letter, which concerns “the illegality of coercing students to abort with threats of loss of access to education and opportunity,” to pro-life advocates at public colleges and universities.

“For people/students to get a copy they must request it from SFLA, and this letter is for public schools and universities, as private schools have a different framework,” a spokesperson wrote in an email. (Private institutions can assert exemptions to Title IX.)

“Public institutions of higher education that receive federal funding may not discriminate on the basis of sex, including by limiting access to educational opportunities because of pregnancy or by coercing a student to abort her unborn child,” according to the one-page letter, which SFLA shared with The Fix.

Pressuring students to abort “constitutes discrimination based on pregnancy status which is considered to be discrimination based on sex,” the letter says. That includes threatening to take away athletic scholarships and “competitive opportunities” from pregnant students, refusing them housing on the same basis as male athletes, removing them from sports teams and not providing “medical leave from class assignments.”

The letter concludes that students who believe they faced pregnancy-based discrimination, or pressure to abort by a college staff member, “should contact an attorney immediately to ascertain what her rights may be.”

“ADF is committed to ensuring students on public university campuses are not coerced to violate their religious convictions,” Theriot told The Fix. “This is particularly important in the context of government officials retaliating against women who choose not to have abortions.”

The letter provided by SFLA is dated Oct. 2 and is directed “To Whom it May Concern.” The spokesperson said that was the date SFLA received it from ADF, but she wasn’t sure anyone had requested it yet.

The exact logistics of sending the letter are not clear. The spokesperson said both that the letter would be provided “upon request” – suggesting it would be given to complainants – and that SFLA would send it “to public universities and colleges as requested.”

She also said the group will “vet” each complaint it receives, but did not answer repeated requests to clarify whether it will provide or send the letter without vetting allegations. The spokesperson also did not answer whether each letter will be tailored to the specific allegations against the college or university that is the ultimate recipient.

“Getting the details on complaints/incidents and asking legal advice is a regular event” for SFLA, whether the issue is Title IX or violations of pro-life students’ free speech, she wrote. “ADF and other legal counsel will be consulted.” The goal is to get schools to “reconsider their policies” before litigation, which is “not uncommon.”

Hasn’t finished school because she didn’t know her rights

The same day it announced the new campaign, SFLA hosted a Facebook webcast featuring two young women who shared their stories of being pregnant on campus and learning their Title IX rights.

Jessica Riojas said she searched for what rights rights parenting students had at her school but “didn’t really find anything concrete.”

Riojas had failed all her classes the semester she dropped out. In order to academically withdraw and have those grades removed from her record, she had to prove she dropped out due to the pregnancy.

She got the failed grades removed and started the master’s program at Fresno State University for speech pathology. Her daughter is now three years old.

MORE: College that kicked pregnant student out of dorm forced to reverse

Ruth Asmarzadeh considered having an abortion but decided to give birth to her boy, she told the webcast. She had the baby a week before finals and didn’t understand her rights, or that her teachers would have to work with her.

Asmarzadeh missed her finals and failed her classes. When she tried to reapply for classes the following semester, she learned she had lost her financial aid and could not register.

The college did not let her appeal even though she had proof she failed due to her pregnancy, Asmarzadeh said. Though a friend told her about her Title IX rights and an advisor got her reinstated, Asmarzadeh said she was still too busy with her child and failed her classes again in the new semester.

The campus chapter of SFLA set up a baby shower for her and showed her support, which Asmarzadeh said was “kind of weird because I wasn’t used to that kind of acceptance on campus.”

If she had known her rights when she got pregnant, Asmarzadeh believes she “would still be in school and have my degree by now.” She’s headed back to school in the spring to finish her degree.

‘Too often, Title IX coordinators are either complacent or complicit in violations’

SFLA said it will use its 1,200-plus “groups and chapters” to talk to students, Title IX coordinators, athletic directors and coaches about “the support that pregnant and parenting students need, deserve, and is required by law.”

It will also advertise its Pregnant on Campus initiative “across social media platforms.” It seeks to help pregnant students get “parking passes during pregnancy, access to child care on campuses, and nursing rooms,” said Camille Cisneros, director of the initiative.

The initiative has even started rating schools based on how well they treat and accommodate pregnant and parenting students.

“Pregnancy should mark the beginning of a new life, not the end of an academic career,” Hawkins said in the press release. “No student should have to choose between their child and their education.” 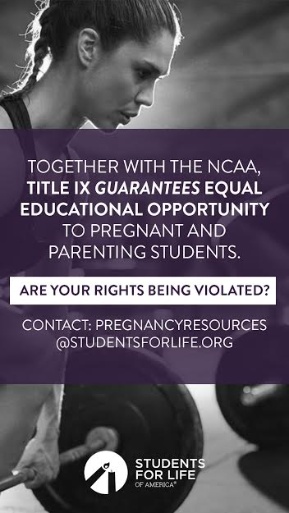 The bill of rights informs students that “they cannot be discriminated against or face loss of scholarships, housing, athletic eligibility, or opportunity simply because of their pregnancy or parental status.”

The 10-point document says pregnant students have the right to live on campus and “make her own decision about off-campus housing” when her child is born. They cannot be “subject to penalty” in the form of financial aid, including academic and athletic scholarships.

Four of the points in the bill of rights specifically mention sports. “Recipients of scholarships, athletic or otherwise, are to be fully informed of their Title IX rights,” it says. “Coaches or other school officials who fail to fully inform students are to be deemed negligent.”

The document lays much of the blame for students aborting on university employees, including Title IX staff.

“Athletic directors or coaches may not bully students into abortion threatening loss of future or present opportunity,” it says, linking to a video interview of Olympian Sanya Richard-Ross discussing her abortion (below).

“Campus Title IX offices are responsible for ensuring this law is followed. Too often, Title IX coordinators are either complacent or complicit in violations,” the bill of rights says.

Earlier this year, SFLA helped convince Liberty University to revise its policy that removed pregnant women from  campus housing. Now, women get to choose whether that want to remain in the dorms or leave if they become pregnant.

Two years ago, the group’s High Point University chapter threw a pizza party to get signatures for a petition asking for relief for pregnant and parenting students and staff. They wanted special housing, daycare, diaper decks and a healthcare professional that is a trained pregnancy coach.

"I literally don't know another female track athlete who hasn't had an abortion." @SanyaRichiRoss shares her story in 'Catching Grace' pic.twitter.com/tMHfT8RP4W