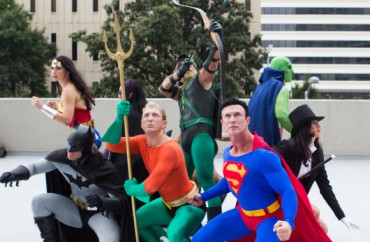 Thursday is the pro-life #WomenBetrayed National Day of Student Action, and unsurprisingly, pro-life campus groups are being treated like the scum of the earth.

One participating group saw its campus effort destroyed by vandals who spread their crime on Twitter, while another was itself accused of vandalism by police.

However, the posters did not last long, as another student group known as the “AU Justice League” tore them down just hours later and tweeted “We had some fun with the college republican posters tonight. Let us know if we missed any guys!” with a picture of the torn down posters crumpled together with what appears to be someone’s middle finger pointed at them.

The AU Justice League account is now down, but not before its evidence was captured.

Whoever you are/were, AU Justice League that just deleted your account, your good works live on. pic.twitter.com/aop9JzozBl

The AU chapter of the Network of Enlightened Women responded with more speech,

posting flyers of a George Washington quote, “If freedom of speech is taken away, then dumb and silent we may be led like sheep to the slaughter.” Obviously, some people in the AU community need to learn more about free speech, tolerance, and diversity of thought.

Meanwhile, at Utah State University, pro-life students are themselves under attack as vandals for chalking pro-life messages.

A student only identified as Melissa told SFLA that she “frequently see[s] messages chalked across campus” for activities and “random pictures,” but campus police approached her group after they finished their #defundPP display:

We again got the impression it was okay for us to be drawing there because a campus security car was parked nearby watching us for almost 20 mins while we were drawing and didn’t say anything, and a campus cop drove over it while we were still there. However as we were leaving a Campus policeman came up and asked us if we had permission to write on the sidewalk. We told him we didn’t know we needed permission,and he informed us that it was classified as Vandalism and asked for our IDs. He told us that chalk isn’t allowed, that it is a big problem and that people would be offended by our message.

More cops had arrived by the time the chalkers came back with cleaning supplies, “guarding it as if we they were guarding a crime scene,” and a facilities person who was called out to spray “asked us what we had drawn that got the cops so riled up”:

It was apparent that they don’t usually get called to clean up chalk.

The officer who initially stopped them reiterated that their message would offend pro-choice students, “get posted online and become a big deal,” confirming for Melissa that this alleged rule was selectively enforced against her viewpoint.

SFLA said it’s consulting its lawyers, and it sounds like the Foundation for Individual Rights in Education – which has defended a Johns Hopkins pro-life group against official discrimination – might jump in too.

If they were violating a chalking policy, that's one thing. But if this really was about risk of causing offense… https://t.co/hgpdWfS2o1

Utah State has a red-light rating from FIRE for “at least one policy that both clearly and substantially restricts freedom of speech,” though none of the troubling policies listed by FIRE appears relevant to chalking.

Read the AU and Utah State posts at Students for Life of America.

UPDATE: American University released a statement about the vandalism of the pro-life flyers, also tweeted:

American University works closely with student groups representing varied political and cultural beliefs and encourages all students to follow university protocol when disseminating information and to respect each others views. There is no group named the AU Justice League that is registered at American University and AU does not approve of the behavior that was displayed regarding the recent removal of pro-life flyers that were posted around campus.

Camille Lepre, assistant vice president of university communications at AU, told The College Fix it does not get reports of vandalized posters “very often at all” and there was no incident report filed about the vandalism. The school learned through “social media and the news media,” and it’s investigating, she said.