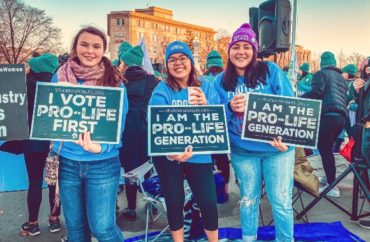 Pro-life students faced harassment this past weekend simply for standing up for preborn babies and pregnant women. Their views should not draw as much ire — after all, 96 percent of biologists agree with them that human life begins at the moment of conception.

But nevertheless, their views drew harassment and hatred.

The first Sunday of October is traditionally when pro-life groups host “Life Chains” which generally involve standing near streets and on sidewalks to share pro-life messages and to pray together. October is Respect Life Month for the pro-life movement.

One such target of harassment was a group of pro-life high school men who attend Belen Jesuit High School, a Catholic high school in Miami, Florida.

Jessica Resuta, an intern for Students for Life of America and a contributor to The College Fix, reported:

The young men joined the peaceful event for life and pictures from their school’s Instagram were met with an onslaught of social media attacks mostly from pro-abortion women. One of the most provocative posts edited the students’ photos into a scene from the game ‘Grand Theft Auto’ to portray them being hit by cars and left dead on the road. The tweet read ‘how many points are they worth?’ Multiple tweets either called the students names like ‘misogynists’ or ‘disgusting’ or edited their photos to display vulgar messages on their pro-life signs.

Rubio tweeted: “You will be hated by all because of my name’ Matthew 10:22” along with a photo of the students.

“You will be hated by all because of my name…”

The harassment follows a contentious rally outside of the Supreme Court where a Students for Life staffer was allegedly punched by a pro-choice activist.

Rebecca Downs, a Students for Life staffer writing about the aftermath of the rally, warned that the punching was “likely just the beginning.”

“The tragedy of the dehumanization and violence against the preborn motivates me that much further in my aim to abolish abortion,” Downs said.

“I can’t even fathom committing violence against an abortion advocate, and neither could pro-lifers across the entire movement.”

As the Supreme Court hearings for Judge Barrett start on Monday, it’s likely that there will be further harassment and violence.

Or, if we’re lucky, the pro-choice activists will just wear those silly handmaid costumes.