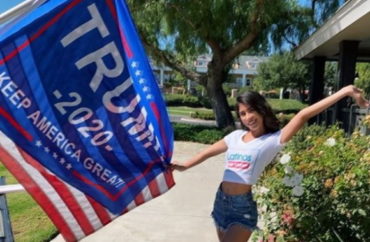 ‘Conservatives are not welcome in student government’

A pro-Trump Hispanic student at Loyola Marymount University who serves as the student government senator for diversity and inclusion at the school is facing an impeachment probe this month by her peers.

The attempt to remove her began late last spring after a progressive student news organization uncovered past tweets in which she voiced opposition to illegal immigration, and now that effort will soon be voted on by the Associated Students of Loyola Marymount University.

Stephanie Martinez, who describes herself as conservative, became the subject of the impeachment inquiry on Sunday night after her fellow diversity and inclusion senator, Camille Orozco, brought forward an impeachment motion during the student government’s weekly meeting.

“Sen. Martinez’s public statements and actions undermine the mission of inclusivity pertinent to her role as Senator for Diversity and Inclusion,” Orozco’s complaint reads, according to a copy obtained by The College Fix.

“I, Sen. Orozco, maintain that the responsibilities related to this position, are not only undermined, but completely contradicted by the impact that Sen. Martinez’s statements and actions have had among the student body.”

Shortly after being elected last spring, Martinez’s old tweets resurfaced after a progressive news organization, Agency LMU, brought them to light in a May 2020 post.

In one tweet from July 7, 2019, Martinez wrote that “the same people advocating for rights, equality and better conditions for illegal aliens are the same one censoring freedom of speech (a right), defaming and initiating hostility for those Americans with divergent views! Sad!”

Her tweets prompted the creation of a petition calling for her impeachment, and removal from the student government, which garnered about 560 signatures.

Martinez, in an interview with The College Fix this week, said her peers are trying to silence her for her views.

“I’m so disappointed to see these discriminatory allegations coming from my peers on the Senate,” Martinez said. “All I wanted was to spread intellectual diversity on campus by giving conservatives without a voice a say in our student senate.”

She added, “They have proven to everyone that conservatives are not welcome in student government and that the ‘tolerance’ that the left ascribes to is only meant for those that are ideologically similar to themselves.”

“They are willing to go so far as to break their own non-discrimination policy to see me removed.” 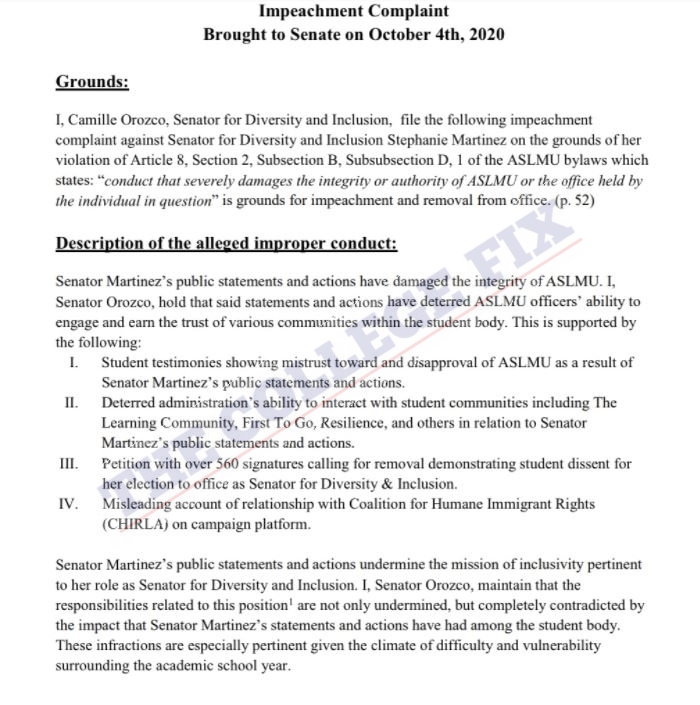 The non-discrimination policy she referenced states no officer or member will be discriminated against based on their political affiliation, according to ASLMU’s constitution.

A three-fourths vote is required to remove a sitting ASLMU senator, according to student government bylaws.

Donahue said he will defend Martinez, stating, “in the event that she is removed from the ASLMU Senate, let the record show that LMU has set a precedent for schools across the country that conservatives aren’t welcome to express their opinions. All of our fears concerning the apathy towards the first amendment on university campuses will come to fruition.”

Orozco declined to comment, telling The Fix, “given the sensitive nature of the coming proceedings, I don’t feel comfortable responding to your inquiries or providing a comment at the moment.”

Martinez, for her part, is not backing down.

“I stand by my comments. The message was one of protecting free speech – one of the values fiercely upheld by the administration of LMU,” she said.

“They can call me, a Hispanic woman, a racist all they want but the fact remains clear that I did not say anything wrong,” Martinez added. “ASLMU is supposed to protect all student voices, regardless of political identity. It is more damaging to the integrity of ASLMU to discriminate against me for being a Trump supporter.”