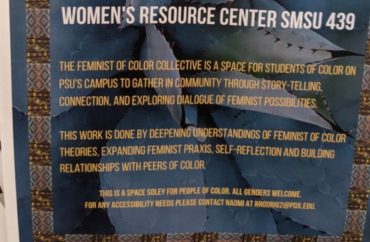 Do you want to join the Feminists of Color Collective at Portland State University? Your skin needs to have “color,” whatever that means.

A professor at a different university is asking the U.S. Department of Education to open a Title VI investigation of the public university for discriminating against students based on their color, which is explicitly mentioned in the statute.

Economist Mark Perry of the University of Michigan-Flint, widely known for filing similar antidiscrimination complaints against public institutions across the country, emailed the Seattle regional office of the department’s Office for Civil Rights Tuesday morning.

He copied The College Fix on the email:

Portland State University (PSU) is a public university that receives federal financial assistance and is therefore required to enforce Title VI’s prohibition of discrimination based on race and color. PSU is a public university in the state of Oregon and under the jurisdiction of your office. Therefore, I am requesting that the Seattle OCR investigate PSU for violating Title VI for the following discriminatory program as described in the photo of a flyer below that was publicized on Twitter by assistant professor of philosophy at Portland State University Peter Boghossian.

As seen on the wall at Portland State University.

“This is a space soley [sic] for people of color. All genders welcome.” pic.twitter.com/pl60TtQtY1

The flyer makes clearly that the collective’s meetings are “sole[l]y” open to students of color, even as the explicitly feminist group welcomes “all genders.”

Portland State has already defended the right of the collective to refuse membership to those based on their protected immutable traits, in spite of university policy defining discrimination as “excluding from participation” based on race and color.

Without answering Fix questions about the group’s requirements in light of PSU policy and federal law, the administration told us last month that it offers “a lot of student support centers” for various groups to gather. The Feminists of Color Collective meets “weekly for one hour in an affinity space at the Women’s Resource Center to provide peer support, share a meal, and decompress.”