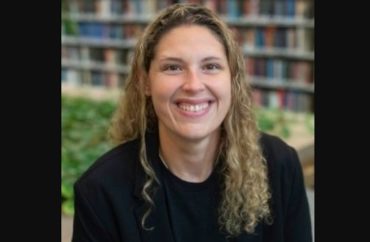 A visiting professor of education at St. Lawrence University claims that women’s basketball phenom Brittney Griner was a victim of the low regard people have for women’s sports.

Elisa Van Kirk asks in the Times Union why Griner, imprisoned in Russia for drug possession and ultimately part of a prisoner exchange for a deadly arms merchant, even had to go to that country to play in the first place.

“Most fans would say money,” Van Kirk (pictured) writes. But she has an alternative theory: Because Americans’ views about women’s sports in general are poor, Griner and other women athletes have to travel elsewhere in order to make a decent coin.

“[A] few months ago, a man started a conversation with me about how the Women’s National Basketball Association (WNBA) is ‘boring’ because most women do not dunk,” Van Kirk says. She’s also heard that “no one would come to our games,” that “we could never beat the boys” and “all about the biological differences why men were more athletic.”

And in cases where women “prevailed in coed competition to combat” such pronouncements, “the insults started.”

But I asked [the man], if athletes like Tom Brady and Kobe Bryant attended WNBA games and were interested, why shouldn’t he be?  Likewise, legendary basketball coach John Wooden publicly commented on being a fan of women’s basketball. Men like Wooden are true champions and advocates for women. Their actions really demonstrate their advocacy, not just their words. With examples like these, I cannot help but wonder why feelings of hatred or disdain persist for some men today toward female athletes.

If Van Kirk is iffy on basic biology, she also is on economics. If someone like the New York Yankees’ Aaron Judge can demand $300 million and get it, she says, why can’t someone like Griner?

“Women who want to play in the U.S. are often forced to take the salary they are given because they should feel ‘lucky’ for the opportunity,” the sports and gender researcher concludes.

MORE: Prof: Sports responsible for ‘belief’ that men are stronger and gender is binary