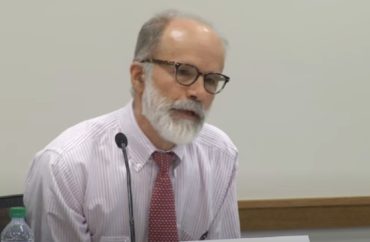 His critics previously compared him to a mass shooter

A Harvard Law professor refuses to grovel at the feet of activists and academics who disagree with his historical analysis of claims that Korean women were forced into prostitution during World War II.

Professor Mark Ramseyer (pictured) first came under fire last year after he criticized the claims of Korean women that they were forced to be “comfort women” during World War II for Japanese soldiers. Ramseyer has studied and taught in Japan and is an expert in Japanese legal studies.

Instead of bowing down to the woke mob, Ramseyer wrote a 66-page rebuttal.

Activists had previously compared Ramseyer’s original eight-page paper, that critiqued forced prostitution claims, to a deadly shooting on March 16, 2021 that left six Asian women dead in an Atlanta spa. “[I]t is diﬃcult for us to separate the atrocity of last Wednesday’s events with the atrocity of his claims in this article, as they perpetuate harmful ideas that played a key role in the March 16th shooting,” the Harvard student government wrote in a list of demands for the university.

The student government accused him of bias against Asians, ignoring the fact the law professor’s paper defended Japan.

The editorial board for The Crimson referred to the law professor’s original paper as a “lie” and “disinformation” not worthy of academic freedom protections.

The primary claim of Ramseyer’s paper is that the “comfort women” were willing to sell themselves for sex. The primary source for claims that they were not, and were actually forced into prostitution, is a fabricated book.

“All the critics ignore my actual topic: the economic rationale to the contractual structure that brothels and prostitutes employed,” the professor wrote in the introduction to his response paper. “In my article, I had asked two main questions: (i) why brothels and recruiters paid women large amounts of money up front, and (ii) what contractual mechanisms determined the length of time the women worked.”

“The critics largely ignore both questions,” he said.

He did not back down from his claims that cause discomfort for his critics. “I do not believe their statements are credible,” Ramseyer said about the few Korean women from WWII who said they were forced into prostitution.

His paper and refusal to back down is a small victory against the politically correct mob.