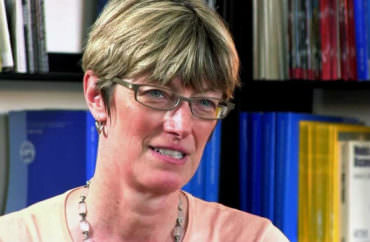 WASHINGTON, DC – A Senate committee tasked with preventing the collapse of the Obamacare exchanges took on another looming crisis Thursday: worsening threats to free speech on college campuses.

The threat is not simply to intellectual diversity on campus, according to the professor who was injured trying to protect a campus speaker from a mob at Middlebury College in March.

“National security depends on” college students learning how to use their words instead of violence to counter offensive speech, Allison Stanger told members of the Senate Health, Education, Labor & Pensions Committee at its Thursday hearing, in her first government testimony about the incident with libertarian social scientist Charles Murray.

Presumably speaking of alleged Russian meddling in the 2016 general election campaign, Stanger said “we must not [allow our enemies] to divide us.”

From Murray at Middlebury to white nationalists in Charlottesville and alt-right leader Richard Spencer at the University of Florida, freedom of even hateful expression must be protected from suppression by violence or other means, senators and free-speech advocates said at the hearing.

Chairman Lamar Alexander (below, greeting witnesses) said he had a personal nexus with the issue.

“When I was a student in the 1960s at Vanderbilt University, the John Birch Society wanted my political science professor fired,” the Tennessee Republican said in his opening statement. “They said he was a communist because he thought World War I was a mistake.”

Throughout the hearing, Senate Democrats laid the blame for campus protests at the feet of President Donald Trump. 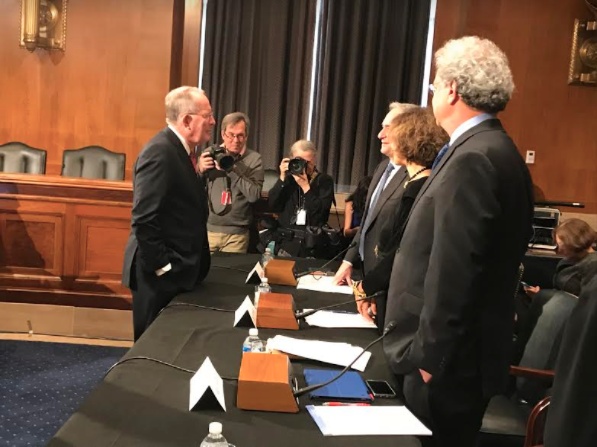 Alexander and Ranking Member Patty Murray have worked together closely to stabilize the healthcare exchanges, and the positive Congressional Budget Office score that their legislative proposal received this week was praised sporadically in Thursday’s hearing.

But their differences on campus speech issues quickly surfaced.

After the chairman conceded that “deliberately inflammatory speakers” on campuses were pushing “freedom of speech to a limit that creates chaos,” his Democratic counterpart said the bigger focus should be to “push back against those driving an agenda of extremism, racism, bigotry, xenophobia, and misogyny.”

The Washington state Democrat took President Trump to task for his controversial statements on immigrants and other minorities.

“It’s no secret that leadership in this country have made disparaging public comments against Mexican Americans, women and Muslims,” Murray said. “This rhetoric has emboldened extremist hate groups” who had previously kept quiet, knowing they “would be shunned by their friends, neighbors and communities.”

Democrats Michael Bennet of Colorado and Elizabeth Warren of Massachusetts also used part of their time to ridicule Trump’s mistreatment of the press.

Murray introduced the president of American University’s student government in the audience, whom the senator had met Wednesday.

Taylor Dumpson’s spring election as the first black female to hold that campus office was soon followed by the hanging of bananas in tiny nooses on campus, marked with the initials of her historically African-American sorority.

“While the FBI is investigating these incidents as hate-crimes, Taylor is speaking out to highlight the toll this is taking on the students being targeted by hate speech,” Murray said without giving Dumpson’s surname. “And this is just one incident [the cotton stalks]. There are so many more.”

‘They must learn to challenge speech with more speech’

The witnesses who testified all identified as Democrats, but they agreed that Congress should never attempt to regulate campus speech in the manner of speech codes that are commonly found on campuses.

Middlebury political science professor Stanger, who continued moderating the Murray event after protesters forced them to move to a room served by a closed circuit broadcast, criticized her fellow faculty members for “cheering on the protesters.”

Students and community members had chased her and Murray out of the speaking venue and wrenched her neck, requiring a trip to the emergency room.

Stanger noted her colleagues admitted they had not read a word of Murray’s work, including his controversial 1994 book “The Bell Curve.”

“We can and must do better” in encouraging students to embrace diversity of thought, she said:

Students must feel free to speak their minds, make mistakes, and learn from them if they are to develop both intellectually and emotionally. They must learn to challenge speech with more speech, to think for themselves rather than relying on somebody else to tell them what to think or do, as well as to reflect on how their words and actions affect others.

Stanger quoted “Hamilton” star Lin-Manuel Miranda’s summary of America as a “great unfinished symphony.” No stranger to speaking out, Miranda personally addressed Mike Pence, then the vice president-elect, at a performance of the Broadway musical in November.

University of Chicago President Robert Zimmer touted his institution’s so-called Chicago Principles and their “unwavering commitment to free expression,” embrace of non-disruptive demonstrations and prohibition on “limiting the rights of others to engage in free expression, work, and open discourse.”

Students will be unprepared for the real world if they don’t engage with diverse ideas, Zimmer told senators: “To limit free expression is to limit quality of education and limit quality of research.”

Following that effort, which some of its own faculty criticized, “I think we’re working very hard in all these aspects of free expression and I think we’re doing well in a couple complicated situations,” Zimmer told The College Fix in a brief interview after the hearing.

New York Law School Prof. Nadine Strossen, former president of the ACLU, stressed the need to protect freedom of expression “no matter what [students] believe” and rebuffed the notion that “hate speech is not free speech.”

America should not follow the lead of countries like Canada, which passed a law last year criminalizes improper gender usage, said Strossen, author of the book “Hate: Why We Should Resist It with Free Speech, Not Censorship.” She praised Australia for following “the American model” by outlawing attempts to suppress speech.

“We need civil society to speak out and to condemn,” Strossen said.

Southern Poverty Law Center President Richard Cohen claimed that more than 200 colleges have been targeted by white nationalists and related groups, who are “energized” by President Trump’s rhetoric.

He cited Identity Evropa, which describes itself as “a generation of awakened Europeans” whose “free speech and livelihood” is under attack by “politico-corporate interests” that promote the “mainstream anti-White narrative.”

White supremacist groups “parade around as First Amendment martyrs,” and “antifascists” are making their case for them by trying to shut down events with speakers such as former Breitbart editor and alt-right figure Milo Yiannopoulos, Cohen said.

Debate about kneeling has ‘always puzzled me’

Questions from committee members ranged from the university’s role in protecting free speech to the NFL “Kneelgate” controversy.

Georgia Republican Johnny Isakson said the Chicago Principles are reminiscent of Martin Luther King Jr.’s approach in the South in the 1950s and 1960s, emphasizing non-violence as a means of demonstrating against segregation.

He asked witnesses about NFL players who have been kneeling during the national anthem to protest issues including police brutality.

“It’s always puzzled me about this debate we’re having about the NFL,” Stanger (below, with Alexander) replied. “That people don’t recognize that taking a knee is a sign of respect, not disrespect.” Zimmer said he would indeed support his school’s football team following the playbook of those NFL players.

“I know nothing about sports, but I know about the First Amendment,” Strossen added. She quoted Thomas Jefferson: “Dissent is the highest form of patriotism.” 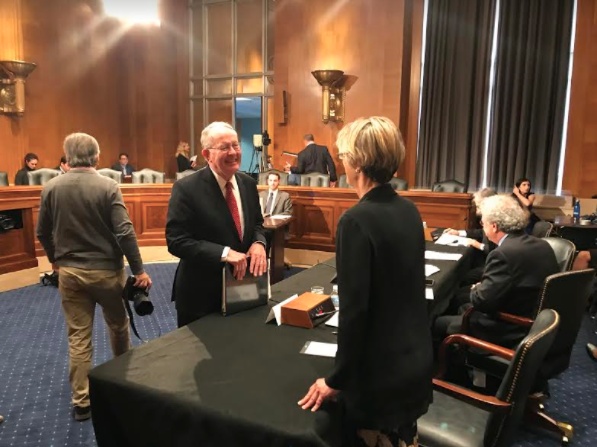