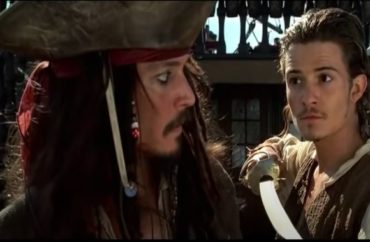 One of the odder takes on the outcome of the Johnny Depp/Amber Heard trial came from a Stanford law professor who pointed out that the Pirates of the Caribbean films gave a cold shoulder to slavery.

Michele Dauber, also a sociologist, wrote early Saturday on Twitter that “‘Captain Jack’ and Pirates of the Caribbean whitewashed and erased slaves and slavery from the 18th century Caribbean, where its practice was probably the most cruel in the world. Pirates were often far from the freedom-fighters the film portrayed but were slaveholders themselves.”

Dauber added “In case you need another reason to hate Johnny Derp, the Pirates franchise is DEEPLY racially problematic […] even the fictional character Derp’s fans love and think is a real depiction of Derp himself is almost certainly a racist sociopath.”

The professor, author of a “highly original historical and sociological studies focusing on the history of social provision and the US welfare state,” included in her original tweet a study snippet which quotes English naval historian David Cordingly.

Cordingly had criticized “romanticized portrayals” of pirates because they “shared the same prejudices as other white men in the Western world” and “regarded black slaves as commodities to be bought and sold.”

"Captain Jack" and Pirates of the Caribbean whitewashed and erased slaves and slavery from the 18th century Caribbean, where its practice was probably the most cruel in the world. Pirates were often far from the freedom-fighters the film portrayed but were slaveholders themselves pic.twitter.com/UlNYcMGZcL

Dauber (pictured) derisively (and consistently) refers to Depp as “Derp” in her many tweets and claimed he is at least partly culpable for the films’ omission of slavery as he “personally rewrote on the films.”

“Most Hollywood films are far too white,” Dauber said. “But the omission is particularly glaring in a film that is literally about the time and place at the dark heart of the Atlantic slave trade yet all the main characters are white although Pirates are portrayed as anti capitalist crusaders.

“There are more ghosts and squid people than slaves, freed or otherwise, in this series — including the installment that Derp claims he rewrote. The fact is that for this day and age, even for Hollywood, this is an unreasonably white film given its context.”

And if you need more evidence that there is an overlap between anti-women and anti-Black individuals in Derp’s fanbase, please take a look at some Derp/Pirates superfans. pic.twitter.com/Pxi3VfImX1

Needless to say, many commenters on Dauber’s thread pointed out what should be obvious — that the Pirates of Caribbean franchise is fantasy:

Who is going to tell this @Stanford professor that the movie was make-believe? There is no Davy Jones octopus head pirate. No Black Pearl ship. All made up. Fantasy. Untrue.

So, you’re saying that a movie franchise with curses, magic ships, and ghost sharks may not be historically accurate?

The Pirates of the Caribbean movie was based on a Disney ride. It was such a huge success that a franchise was created. It has sea monsters & zombies and all sorts of things that go bump in the night. It’s not historical fiction it’s just a fun ride. Get your panties out of a wad

Several years ago — against the wishes of the victim — Dauber led a campaign to recall the judge who gave an allegedly light sentence to a Stanford student convicted of sexual assault.

MORE: Everyone wants to brutalize Brock Turner – except his accuser and legally serious people