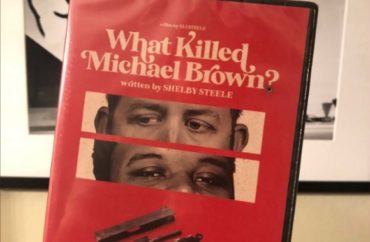 Ahead of an event at Bucknell University featuring the new film “What Killed Michael Brown?” a professor has argued that questioning systemic racism “is itself offensive and racist.”

The new film “What Killed Michael Brown?” will first be screened, then the scholars “will offer different perspectives on whether the idea of systemic racism today is a truth about what needs to be addressed in shaping a just America, or a ‘poetic truth’ that as a strategy exacerbates social division in America,” according to campus organizers.

Jordan, in his campuswide response to the notice about the event, argued that the “framing of recent posts on Message Center questioning the existence and impact of systemic racism in the United States is itself offensive and racist.”

“Systemic racism is as old as European footprints on this continent, and is an established fact in today’s American society. These facts are supported by an overwhelming majority of qualified scholars, and the lived experience of many Bucknell community members. This clickbait framing is not serious, and would be laughable if it wasn’t so offensive,” Jordan wrote.

“These posts are akin to questioning the truth of slavery or the mass murder of Christians under Stalin’s Great Purge. We would all be outraged to receive an email with the subject, ‘The Holocaust: Truth or Poetic Truth? Two Perspectives.’ We should be similarly offended by these emails, which are, ironically, themselves evidence of systemic racism.”

Jordan did not respond to an emailed request for comment from The College Fix over the weekend seeking to clarify if his concern is with the event itself, or the fact that it was publicized on the campus listserv — or both — as well as to discuss how his argument can co-exist with academic inquiry, intellectual diversity and freedom of thought.

Mike Ferlazzo, a campus spokesperson, told The College Fix that the “message in question was made by a Bucknell faculty member on a University message board and reflects his personal views, which do not represent the views of the University.”

The systemic racism discussion is sponsored by the bipartisan Bucknell Program for American Leadership and Citizenship, also known as BPALC. The program has come under fire in the past.

In 2019, for example, when BPALC hosted conservative scholar Heather Mac Donald, her talk prompted vandalism, fiery op-eds in the campus newspaper, a planned picket line, a counter-protest event, and discussions of blacklisting students and scholars who support BPALC and its goals.

As for Tuesday’s event, Professor Jordan was not the only scholar to speak against its advertising and focus. In response to his comments, Bucknell Associate Professor of Education Amy Golightly sent a note to the faculty listserv calling it “gross.”

“And if any white colleagues still wonder why our Black and Brown colleagues and students feel unwelcome, unsupported, invisible on this campus, this is a prime example. That systemic racism exists is not a matter that should be ‘up for debate’, any more than climate change or the tenets of epidemiology should be. To introduce this issue as a matter of opinion is egregious and irresponsible. It is also a position put forward in bad faith, in my opinion,” according to Golightly’s comments, obtained by The College Fix.

Black conservative, Shelby Steele, takes on #BlackLivesMatter and Liberalism in his new documentary to be released October 16, 2020. The trailer: pic.twitter.com/zSUOBuk2Ce

While is appears unfettered academic discourse at Bucknell is not very popular with some scholars, it’s about to get a boost.

Tuesday’s webinar is also slated to feature introductory remarks by Kenneth Langone, “who from a working-class immigrant family graduated from Bucknell in 1957 and became co-founder of Home Depot, and a major supporter of scholarship funding in higher education. He will announce a new initiative to support thoughtful dialogue at Bucknell,” according to organizers.

Jordan, in his email to the campus community, had denounced dialogues questioning systemic racism.

“Systemic, or structural, racism does not necessarily depend on the existence of obviously racist people, like neo-nazis or KKK members. Rather, it is embedded in the structures of society, including systems of education, medical care, housing, finance and banking, employment, policing and courts, entertainment and media, religion, agriculture and food systems, and politics,” the professor wrote.

“It functions by preventing or diminishing certain groups’ access to the benefits of those systems, and is supported by millions of data points in thousands of peer-reviewed studies. While systemic racism is often invisible to members of the dominant culture, who can question its existence without consequence (see above), it is present in the everyday lives of millions, including many Bucknellians,” Jordan wrote.

“There is perhaps little we can do about these emails, though I would encourage our Human Resources professionals to investigate them as creating a hostile working environment for many members of our campus community,” Jordan added. “They are also an abuse of Message Center, violating the Appropriate Use Policy that forbids the use of university resources to ‘promote bigotry or discrimination.'”

Jordan, after calling for an investigation into his independent-minded peers, then adds: “In any case, we can always respond to the free speech of a tenured professor with more free speech.”

Bucknell is a private liberal arts college in Pennsylvania. Tuition is listed at about $58,000 a year.