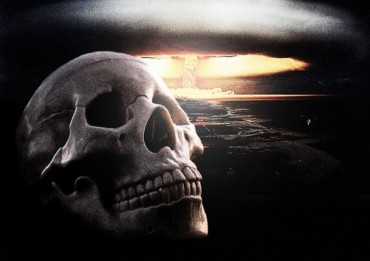 Humans are about as special as bacteria, and the species is about to die off, probably in some sort of global Armageddon or end-of-days climate shift of epic proportions.

That according to Dr. Guy McPherson, a University of Arizona professor emeritus, in a recent speech at the University of Colorado Boulder, during which he predicted humans will die off by 2040.

“All species go extinct,” McPherson said. “We’re about as special as bacteria. … In 2040, there will be little to no humans.”

The end of the world is approaching, the globe is headed into “Armageddon,” McPherson told the roughly 80 people in attendance in a talk sponsored by Local Food Shift and the student-fee funded CU Environmental Center, an arm of the campus student government.

McPherson, a leading voice in the countercultural living and environmental doomsday movements, told the crowd he escaped the Ivory Tower of higher education and now homesteads in New Mexico. He encouraged others to do the same in order to make the most of life before The End. McPherson’s Oct. 16 talk largely centered on two concepts: that global climate change is leading to the end of human civilization and life; and that humans need to move away from a materialistic lifestyle and take after a Socrates-like lifestyle.

“Warming of the planet will remove habitat,” McPherson said. “Without plankton in the ocean there goes half of the food supply.”

McPherson went on to describe a series of reports in 2012 about climate change, citing one which stated: “Global warming is unavoidable unless there is massive geo-engineering.”

Humans don’t have much time with the positive feedback loops impacting the planet due to the releasing of methane, he warned. The deadline to extinction is already predicted, he added.

“There are twelve self-reinforcing feedback loops in 2013 and acceleration is fully underway,” McPherson said. “In 2040, there will be little to no humans.”

McPherson added that this global warming problem has been perpetuated by the burning of fossil fuels and drilling for oil, which has released methane into the environment at an increased rate.

“In 1847, George Perkins, a naturalist and an ambassador, predicted that burning fossil fuels will increase (the planet’s temperatures),” McPherson said. “We’ve had that warning for a while. Again, in 1986, a report by the Secretary of the Navy, also made the same prediction. Keep burning fossil fuels and we will be extinct.”

In the end, with global warming wiping off all plant life and the food sources, humans will perish, he said. Knowing this impending demise is coming, humans have an opportunity to change the focus of their lifestyle, one that involves helping those in need instead of cultivating materials and wealth, he added.

“Looking for someone they can help,” McPherson said, “instead of materialistic goals.”

Dr. McPherson elaborated more on leaving the materialistic world behind by claiming Socrates’ lifestyle was the ideal that humans should strive to attain.

“Pursue what you love,” McPherson said. “Instead of what culture tells you. What do we do in this world? Make money? We don’t ask that question enough. We should be so lucky to live that long. To even ask six questions like Socrates.”

McPherson claimed he is gifted, and he hopes others will spread his message further.

“I have a couple of gifts. Remind others that we are mortal and live accordingly. We need to be reminded of it,” McPherson said. “Culture says we are never going to die. We’ve reached the end of days.”