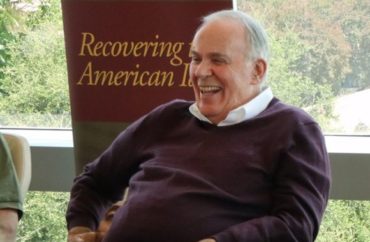 WASHINGTON – Michael Uhlmann, who passed away last month, may be the most consequential government official you’ve never heard of.

His doctoral dissertation helped save the Electoral College, and he drafted the first Human Life Amendment as counsel to Senator James Buckley, brother of the conservative icon William F. Buckley, as touted in Uhlmann’s New York Times obituary.

But he was also a longtime professor, and the mark he left on his students led some of them to tear up as they eulogized him at a celebration Friday night.

The event piggybacked on the National Lawyers Convention hosted by the Federalist Society this weekend. It was a gathering that Uhlmann “rarely missed,” according to an invitation from the Claremont Graduate University, where Uhlmann had taught since 2002.

Many noted his defining Catholic faith, including the Jewish political scientist that Uhlmann helped shepherd into the Catholic Church, Hadley Arkes of Amherst College. The celebration concluded with a recitation of the Hail Mary prayer, with nearly the entire audience joining in.

Michael Greve of George Mason University’s Scalia Law School noted that they used to drink martinis and smoke cigars together at a nearby bar that, like much of old-school Washington, has long since disappeared.

“He was too big to die,” meaning “he did not deserve to die, ever,” said Thomas Klingenstein, chairman of the Claremont Institute board and investment firm principal.

‘Have you tried the Lysistrata strategy?’

Uhlmann’s students emphasized, while trying to keep their composure, how much his interest in their lives affected their academic and spiritual growth.

“I think we missed a bit of the earthy Catholicism of Uhlmann” at other recent memorials for the professor, said Ryan Williams, president and publisher of the Claremont Review of Books, drawing laughs.

The professor “transformed my life” at a point where Williams was wandering, he said: “I wouldn’t be here today without Mike.” Uhlmann quickly became his mentor at Claremont and insinuated himself in Williams’ life, a typical practice of the professor’s: “He loved setting people up or encouraging relationships.”

When Williams’ engagement to his fiancee broke off, the professor quipped “this is why the good Lord invented whiskey,” Williams recounted.

He was not averse to bawdy humor. Uhlmann would offer to share “some videos” with former students whose marriages had ended, an innuendo suggesting they had not consummated the marriage, Williams said. As the student was trying to finish his graduate work, the professor quipped to Williams’ wife “have you tried the Lysistrata strategy?”

Brigid Flaherty, associate director of the faculty division at the Federalist Society, said she met Uhlmann at a Liberty Fund colloquium. The professor regaled the table with stories from his service in the Reagan administration. He had an “earnest desire to learn and to know from others,” and he befriended people without regard to social status, seeing a “certain charm” in them, Flaherty said.

When Flaherty was looking at graduate schools earlier this year, Uhlmann spent a Saturday afternoon with her, sharing stories and joking about academia. “Those two hours on a porch were … a teaching moment,” she said.

In the midst of an unbearable heat wave, Uhlmann attended every class during her Publius Fellowship program with the Claremont Institute, Flaherty said, breaking up: “We all adored him.”

The highest profile guest of the evening may have been Brian Callanan, general counsel for the Department of the Treasury. Uhlmann was his senior advisor as a Claremont McKenna College student and later comforted Callanan as his father died, he said.

The professor could have stayed in public service, and he notably passed up a judicial appointment, Callanan said. He quoted Harry Jaffa, who built Claremont’s political science department, as saying Uhlmann “should have been a columnist, a smarter George Will.”

Instead he returned to teaching to serve as “a wise and generous consigliere” even while downplaying his role, Callanan said.

While the professor joked he would find a Catholic patron saint to get Callanan a job in the White House personnel office, Uhlmann sent a real care package to Callanan’s newborn son that included a toy pistol, so he would appreciate his Second Amendment rights from the start.

‘A gentleman does not disparage the physical appearance of a woman, ever’

After a “very contentious meeting,” Uhlmann scolded the institute’s Klingenstein for not defending him, the board chair recounted. “It still hurts” that he let down Uhlmann: “He never let me down.” Klingenstein said the professor “tempered my bull-in-a-china-shop ways” in a caring manner.

Echoing Flaherty’s account of Uhlmann’s storytelling, Klingenstein said the professor was “his own best audience” but the other audiences “took pleasure in his pleasure.”

Uhlmann could not accept Donald Trump as the Republican presidential nominee in 2016, for an unusual reason, according to Klingenstein: The candidate had insulted the appearance of fellow Republican candidate Carly Fiorina.

“A gentleman does not disparage the physical appearance of a woman, ever, for any reason,” Uhlmann was said to have explained. But Klingenstein guessed that Uhlmann ended up voting for Trump, and “it must have hurt.”

Amherst College’s Arkes, the preeminent legal theorist of the pro-life movement, said Uhlmann wrote Ronald Reagan’s main essay in his book Abortion and the Conscience of a Nation. “Nobody brought to this issue more intellectual force and acumen, deepened by Catholic understanding,” than Uhlmann.

He accompanied Arkes as they went door to door on Capitol Hill to find a sponsor for the Human Life Amendment, Arkes said. This was apparently not widely known, because Arkes said he knew Ulhmann “would not tell” this story himself: “Mike made humility into a vice.” Uhlmann defended his self-minimization by saying anything important he wrote would have a greater effect if Reagan’s or Senator Buckley’s name was attached.

Yet Uhlmann was not a Pollyanna when it came to Republican administrations. He was skeptical of why George H.W. Bush deserved a second term, Arkes said, and once warned Arkes not to join the speechwriting staff. Drawing laughs, Arkes said Uhlmann told him he may be tasked with writing “a paragraph about the urologist convention.”

Arkes learned “the forms of the Catholic mass” through Uhlmann, one of his “sponsors” when Arkes joined the church. Yet he was “maddeningly self-effacing” despite the high rank of those seeking his counsel. Ulhmann was apt to spend Thanksgiving working in a parish kitchen and delivering gifts to parishioners on Christmas morning “in a Mercury station wagon.”

Uhlmann was the “preeminent example of a public man,” a disciple of Claremont’s Jaffa and his emphasis on natural law, despite functioning in a conservative political class that dismissed natural law, Arkes said.

“In Mike we had a figure at the very highest levels of our government who took natural law seriously” and yet “commanded the respect” of conservative jurists Robert Bork and Antonin Scalia, who disagreed with him.