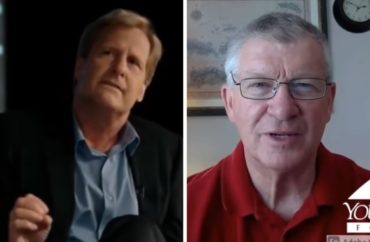 Makes several factual assertions that are likely out of date

Illinois Central College apologized last week for a professor imposing his political biases on students in an assignment on Donald Trump, including threatening to fail a student who balked at trashing the president.

While Troy Daugherty is no longer grading students based on their views of Trump, the American history professor is still setting a poor example for his students.

He gave a monologue critical of America in a recent class session that is clearly plagiarized from a famous clip of the HBO series “The Newsroom,” as documented by a comparison video posted Wednesday by the Young America’s Foundation.

YAF told The College Fix it received the video through its Campus Bias Tip Line. The clip is from the Aaron Sorkin show’s pilot episode in 2012, so long ago that few of his students are likely to recognize it.

Daugherty also makes several factual assertions that are likely out of date now about America’s place in global rankings, suggesting he didn’t update the statistics with more recent figures.

MORE: ICC won’t say if it punished Daugherty for using assignment to impose his bias

Daugherty made a few changes to his monologue from “The Newsroom” clip, but it’s fundamentally the same rant delivered by Jeff Daniels as a fictional cable news anchor on a panel discussion.

Daniels: “We’re the only ones in the world who have freedom? Canada has freedom. Japan has freedom,” as well as the United Kingdom, France, Italy and so on.

Daugherty: “Freedom’s not something that’s unique to America. My God, Canada, Japan, the U.K., France, Italy” and so on.

Both said of the “207 sovereign states in the world … 180 of them have freedom.” (They seem to be including “de facto” sovereign states, not the official United Nations list, which counts 195.)

MORE: Nearly half of GOP students say prof has gone on anti-Trump tangent

Daniels said: “There is absolutely no evidence to support the statement that we’re the greatest country in the world.” Daugherty inserted “arguably” and changed “we’re” to “the United States is.”

He literally cites Daniels’ statistics about America’s rankings from sometime in the Obama administration: 7th in literacy, 27th in math, 22nd in science, 49th in life expectancy, 178th in infant mortality, 3rd in median household income, and 4th in labor force and exports.

America leads in three, according to Daugherty’s apparently uncredited citation of Daniels: “incarcerated citizens per capita,” people who believe “angels are real,” and military spending. (Daugherty appears to have done actual research for this, going into more granular detail than Daniels did.)

Did America used to be the greatest? “We sure used to be,” both said. “We(‘ve) stood up for what was (is) right.” America used to make laws “for moral reasons,” and now it wages war on “poor people (the poor).” The comparisons keeps going – how America used to engage in exploration and disease research, “cultivated artists” and “aspired to intelligence.”

YAF mocked the professor for an “argument against American Exceptionalism wasn’t even his own thoughts.” It has not answered a Fix request for the date of Daugherty’s video or the fuller context, including whether it has a longer version.

Watch the video and the full “Newsroom” scene.