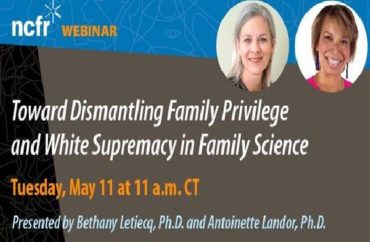 A few months ago, a pair of professors held a webinar in which they equated so-called “family privilege” with white supremacy.

George Mason University’s Bethany Letiecq and Antoinette Landor of the University of Missouri argue that the field of family science has “privilege[d] certain types of families over others.”

“Like White privilege, family privilege is an unacknowledged and unearned benefit instantiated in U.S. laws, policies, and practices,” the professors say. These benefits are “bestowed upon traditional or ‘standard’ nuclear families to the disadvantage of non-traditional configured family systems.”

In this webinar, attendees will examine, recognize, and learn how to dismantle the manifestations of family privilege in our social systems by using an intersectional framework developed by critical feminist and race scholars. Participants will be challenged to consider how structural forces create differential experiences and opportunities that produce diverse family constellations.

At the conclusion of the webinar, attendees will be able to define family privilege, White supremacy, and apply a critical intersectional framework that can be used in one’s work. Using an intersectional lens, presenters will also share multiple examples of how family privilege manifests in Family Science and more broadly.

Letiecq and Landor do not elaborate in the webinar summary how supporting traditional families negatively affects other family structures. There is plenty of research out there, however, which demonstrates the benefits of the “standard” nuclear family.

Interestingly, one year ago Black Lives Matter took down a section of its website which had criticized traditional families.

“We disrupt the Western-prescribed nuclear family structure requirement by supporting each other as extended families and ‘villages’ that collectively care for one another, especially our children, to the degree that mothers, parents, and children are comfortable,” the site read.

BLM also pledged to “ ‘dismantle the patriarchal practice’ that leads to mothers having to work double shifts to make ends meet.”

According to her faculty page, Professor Landor’s research deals with “the impact of colorism and racism on individual, relational, and family health and functioning.” She also studies “family and sociocultural influences on sexual behavior and romantic relationships.”

Professor Letiecq’s research interests include “community-based participatory (action) research and scholar-activism,” “illegality and deportation regimes,” “anti-Blackness” and “ecosystemic resilience.” In 2019, Letiecq was a vocal opponent of George Mason’s hiring of then-new-Supreme Court Justice Brett Kavanaugh as a visiting professor. She alleged Kavanaugh had not been thoroughly investigated before his confirmation to the SCOTUS.