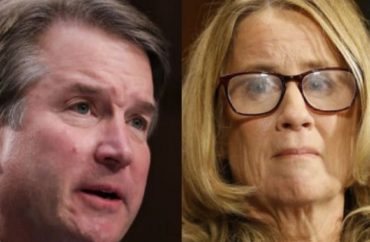 FAIRFAX, Va. — There’s mounting pressure to investigate and fire U.S. Supreme Court Justice Brett Kavanaugh from his newly minted post as a visiting law professor at George Mason University from both students and professors at the school.

Kavanaugh was hired in January by GMU’s Antonin Scalia Law School and is set to co-teach a class this summer called “Creation of the Constitution” in Runnymede, England, where the Magna Carta was sealed.

Exclusive video recorded by The College Fix shows several students, a few who say they are sexual assault survivors, address the George Mason University Board of Visitors meeting last week to tell campus leaders that their mental health is threatened by the Kavanaugh hire.

A student petition created by “Mason 4 Survivors” demands that the university “terminate AND void ALL contracts and affiliation with Brett Kavanaugh at George Mason University.” So far nearly 3,300 have signed it.

Meanwhile, the president of the American Association of University Professors chapter at George Mason University and several peers on the Faculty Senate openly support an investigation by the university into the sexual assault allegations against Kavanaugh, this despite the fact that he was already vetted and confirmed by the U.S. Senate.

The American Association of University Professors usually works to protect educators from frivolous probes, and its members are not typically the ones calling for investigations of faculty.

George Mason University professors made calls for a probe into Kavanaugh during a Faculty Senate meeting last Wednesday, which also drew a small crowd of student demonstrators who lined the back of the room to protest, holding signs such as “students have questions,” “Stop Kavanaugh” and “Support AAUP.”

“He has been confirmed by — this is not a crazy appointment. This is a Supreme Court justice who is going to be teaching about the United States Constitution,” Cabrera said.

“So from that standpoint,” he continued, “I believe I am not going to question the judgment of that. It’s not a crazy appointment … Having a Supreme Court justice is going to create value for the students. The students, by the way, have agreed. The students have signed up to this class.”

Cabrera added he is not making a judgment about the accusations lodged against Kavanaugh or whether he is guilty or innocent. That created an opening for Professor Bethany Letiecq, president of George Mason University’s AAUP chapter, to suggest that’s what warrants an investigation.

“He’s been accused, and there has not been a full investigation as far as I’m … that I can see,” she said.

Cabrera responds: “So, I mean, George Mason University … investigate a Supreme Court justice who has been confirmed by the United States Senate?”

“We do our due diligence on all hires. This is a hire,” a man added, drawing more snaps as someone else calls out “agreed!”

Professor Letiecq has ignored multiple requests for comment by The College Fix.

Cabrera, during the course of his comments, also told the Faculty Senate that Kavanaugh will be paid $25,000 to teach the two-week summer school elective. That prompted a murmur from professors as well.

As for the students, several spoke at a Board of Visitors meeting earlier that day to protest Kavanaugh’s hiring, saying their mental well-being is threatened by him.