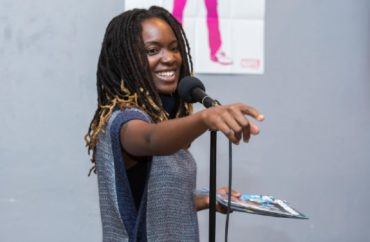 Academics should demand a minimum of $3,500 per hour for talks, according to a Rider University communications professor.

Professor Sheena Howard, who has a doctorate in “Intercultural and Rhetoric Communication” from Howard University, wants to see professors charge that amount when asked to give talks.

However, the suggestion has drawn criticism from some of her academic peers who argue it would price out many organizations and student groups. Others pointed out that most of the research done by professors is underwritten by taxpayers, so to some degree, the information should be shared freely.

Howard (pictured) originally made the argument in an interview last month with Jennifer van Alstyne. The pair are co-hosting two events this weekend on how academics can make more money. Both provide media and branding consulting services to professors.

“If you have a master’s or PhD you should be paid for your expertise,” van Alstyne asserted. She has master’s degrees, one in “English Literature and Culture” and another in “Writing,” according to her website.

The College Fix messaged van Alstyne on Twitter Tuesday morning to ask if she paid Howard an hourly rate of $3,500/hr or $1,750 total for the 30 minute YouTube interview. The Fix also asked if Howard would be paid $14,000 total for the upcoming training seminars this weekend. Both sessions are two hours long, working out to four hours total.

I was invited to do a talk recently that would have helped a lot of people. Want to know what their budget was? They just told me: $500.

Dr. Sheena Howard and I went live just yesterday to talk about how academics should charge a minimum of $3500 for a 1 hour talk.

“My salary and research are funded by taxpayers. Why would I charge a fee to a nonprofit, museum, or school to do public outreach that’s part of my job?” University of Maine professor Jacquelyn Gill asked in response to the tweet. “Why would I charge an academic department for a talk to other research peers and students? This needs qualifying.”

“100%. Dissemination of information is directly in our research & service obligations. It’s part of at least most of our contracts,” Cape Breton University’s Jason Loxton said in agreement. “I’ve never charged a penny. Wouldn’t consider it, unless it were a very well funded organization or for profit.”

A doctoral student at the University of Alabama at Birmingham also suggested the amount would not work for all scholars and groups. “Well, I think it really depends on who is asking for the talk, what the content is, and what they’re asking from you in terms of time/travel,” Shaurita Hutchins wrote in response. “If it’s via zoom and I’m sharing advice about my field or talking about my work to a university as outreach or the help students, free.”

Well, I think it really depends on who is asking for the talk, what the content is, and what they’re asking from you in terms of time/travel.

If it’s via zoom and I’m sharing advice about my field or talking about my work to a university as outreach or the help students, free.

Vassar College professor Catherine Tan suggested, as others did, that corporations could pay more but many academic departments could not.

“If it’s a corporate gig—expecting more makes sense. BUT in academia $500 is pretty standard for invited talks,” Tan wrote. “Many institutions/departments can’t even afford that… This sort of attitude exacerbates inequality in higher ed.”

Some academics have found ways to extract even higher rates from universities for talks. For example, professional race hustler and Boston University professor Ibram Kendi made $35,000 for a 60-minute talk at the University of Illinois.