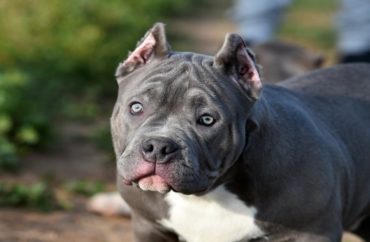 A professor of gender, women, and sexuality studies at Kansas State University recently offered an … interesting hypothesis regarding the marginalization of various dog breeds, especially the pit bull.

According to The Lafayette, “Bad Dog” delves into the “intersection between animal politics and social facets such as gender, sexuality and race,” which Weaver dubs “interspecies intersectionality.”

Weaver said he uses this new intersectionality to “disrupt what is a very common logic in animal advocacy, in which racism is simultaneously engaged and erased through appropriative and substitutive moves.”

The prof alleges the marginalization of minority communities — “tacit heteronormative whiteness” — presents a threat to dogs: “Society is ‘presenting injustices faced by pit bulls as like racism by appropriating the rhetoric and often the effects or emotions associated with race related social justice issues.’”

To communicate the connections between the exclusion of minority communities as proper caretakers, Weaver established that “humans and dogs experience marginalization and structural harms together. This is not a zero sum thing.”

He said that the reasons for putting “bad dogs” in shelters stem from a lack of affordable housing, pervasive racism and misogyny, a struggle to sustain a living wage and myriad other injustices.

Efforts to prevent animals from being placed in shelters, he mentioned, take many forms. Training interventions, free and low cost veterinary care and work to make animal shelters a place for canine education being among the many.

What Weaver said he believed was crucial, however, is the least discussed: the abolition of shelter policing.

“We need to take the police out of this role, and instantiate changes beneficial to marginalized humans and animals together,” Weaver said.

Weaver concluded his talk by defining “multi-species justice”: one which “challenges anthropocentrism [and] that disrupts the pitting of rational man against racial animal otherness.”

If you happen to find Professor Weaver’s vocabulary a bit esoteric, perhaps some of his publications can give you an assist: