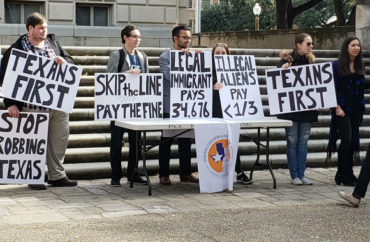 ‘We felt that we needed to start being more constructive’

AUSTIN – After drawing national attention this fall for loud, disruptive and occasionally violent counterprotests at the University of Texas-Austin, some progressive protesters are taking a different tack: silence.

Members of the University Democrats told The College Fix that they were paying more attention to the optics of their activism against the Young Conservatives of Texas, who held a small campus demonstration against illegal immigration Tuesday.

“We felt that we needed to start being more constructive with our actions, as our previous protests haven’t really resulted the way we wanted them to,” said Rory Malek, a public health major. “This time we decided to be silent, but still signal disrespect to the way YCT is handling these sensitive issues.”

The YCT demonstration highlighted state policy of charging in-state tuition to students that are not legally in the country. Conservative students also invited curious peers to discuss the effect of this attitude toward illegal immigration on the university as a whole.

They held signs (above) that explained the steep cost of tuition for legal immigrants compared to those who entered illegally (“legal immigrant pays 34,676,” “illegal Aliens pay [less than] 1/3”). Another sign read “skip the line, pay the fine,” which advocates requiring illegal immigrants to pay out-of-state tuition as a “fine” for “skipping the line” into the country.

The demonstration was similar to one earlier this fall in support of then-Supreme Court nominee Brett Kavanaugh. A huge counterprotest emerged at that event, culminating in some students grabbing YCT’s signs and tearing them up. The administration said it would review “potential criminal violations.”

‘It’s important for us to set an example’

At Tuesday’s demonstration, the security presence was greater and the counterprotest was noticeably subdued.

Instead of the loud chants and physical disruption that marked previous responses to YCT’s events, the University Democrats-led counterprotest (below) was intentionally quiet.

Government major Andrew Herrera, president of the University Democrats, told The Fix he had directed participants to silently protest. “People came by and thanked us for what we were doing,” he said. “With what’s going on with the border right now, it’s important for us to set an example.” 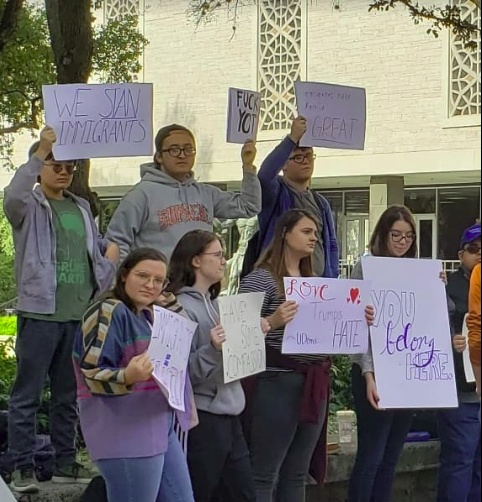 Herrera agreed that the show of force at the event – more than 10 campus police officers – had an influence on the counterprotesters’ behavior. “Honestly all the security does have an impact, but we also expected it. They’re here for a reason.”

The security presence didn’t stop all attempts to disrupt the conservative activism. Some counterprotesters still tried to direct passing students away from YCT’s table, and occasionally shouted slurs including “racist” towards them.

The administration did not directly answer a question from The Fix about whether the increased security presence (below) was due to the series of escalating counterprotests the campus has faced this fall. 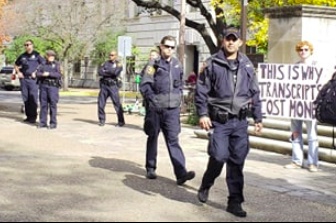 “All students, faculty and staff have the right of free speech and expression on the UT Austin campus. UT strongly values and protects free speech,” J.B. Bird, director of media relations & issues management, wrote in an email. “Campus police were on hand to ensure a safe atmosphere for students to exercise their First Amendment rights, which was accomplished.”

Asked if the university’s limited statements on such protests are intended to prevent the perception that it’s taking sides, Bird said: “Freedom of speech is not about taking sides. It’s about creating an atmosphere where the exchange of diverse ideas can flourish.”

Verbal conflict eventually broke out between the groups when YCT member Samuel Samson crossed over and attempted to debate the progressive students.

Before Samson could finish asking the counterprotesters what part of YCT’s signs bothered them so much, they cut him off: “Tired of listening to YCT, and tired of debating racists.”

Standing in front of Samson, one counterprotester said they all “needed to stop pretending like YCT is trying to have a conversation,” and that if they engaged with YCT, “it’s never going to end.”

Lillian Bonin, vice chairman of YCT, agreed that counterprotesters saw the encounter as a one-way street.

“There really weren’t many people who came by actually trying to have a conversation – only two really actually heard us out,” she told The Fix. YCT was just “trying to share facts with other students” but isn’t surprised that few listened.

Another YCT sign referred to the university’s unusual practice, relative to other Texas public universities, of charging students for both official and unofficial transcripts.

“This is why transcripts cost money” was intended to convey that legal students are personally paying for UT’s treatment of illegal immigrants, Bonin told The Fix.

Students that immigrated illegally can receive in-state tuition under a 2001 state law if they graduated from a Texas high school or received a GED and can prove they’ve been Texas residents for at least three years. They must also “sign an affidavit promising to pursue a path to permanent legal status if one becomes available,”  according to the The Texas Tribune.

This is an unfair advantage that “costs UT money that could go towards benefiting Texans,” according to Bonin.

Ryan Wharton, an observer at the demonstration and counterprotest, disagreed with YCT’s claims.

“Their arguments don’t make sense, since illegal students aren’t even eligible for financial aid,” he told The Fix. “If they were it might be unfair, but otherwise I don’t see the problem.” Such students actually do qualify for financial aid on the Texas Application For Student Aid, which explicitly mentions the 2001 law.

CORRECTION: The original article misstated the entity responsible for charging in-state tuition to illegal immigrants. It is Texas. The article has been fixed.

MORE: Students drown out debate between conservative activist and his critics