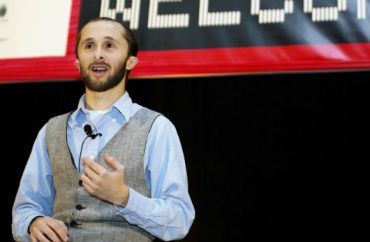 ‘Clear message: don’t dare express unpopular opinions or speak up for yourself’

Critics of the Adams State University administration are planning to march to the president’s office today at noon to register their grievances about its treatment of Danny Ledonne, a former professor it banned from campus last year.

There’s not much they can do for him: Ledonne already secured a settlement from ASU to resolve an ACLU lawsuit that said the school violated his due process and free speech rights. He even posted a photo of his check from the ACLU, minus legal fees.

Ledonne isn’t participating in the march, he told The College Fix in a phone interview. He said later on Twitter he did not want to “distract from the grievances that ASU employees and students have with admin, which are distinct from my own.”

The isolated campus in Colorado isn’t a conducive place for protests, and the administration has tried to steer would-be protesters toward official channels to register their grievances, Ledonne said: Those who protest instead have been “reprimanded.”

(According to the Foundation for Individual Rights in Education, ASU’s “peaceful assembly” policy requires students to give notice of their desired protests and register them with Student Affairs: “ASU retains the right of determining a reasonable time, place and manner for all on campus events.”)

MORE: March planned against president for calling professor a ‘terrorist’

But Ledonne hopes the march will encourage others to be bolder in their advocacy on campus. Meanwhile, he’ll keep covering campus controversies at the watchdog blog he publishes, Watching Adams, which is fed by anonymous contributors and whose launch shortly preceded his repeated run-ins with the administration.

“I do believe that little will change at ASU until faculty, staff, and students join in solidarity for the many common grievances they share,” he said in an email.

PICTURING PERU – a calendar of images is COMING SOON. pic.twitter.com/kIsCNlM1Zg

Ledonne’s settlement with the school – whose president, Beverlee McClure, at one point accused him of “terrorism” against her – was the hot topic at Thursday’s “standing-room only” meeting of the board of trustees, according to ASU’s official account.

Chairman Arnold Salazar continued to portray the cost of the settlement to the university as only $2,500, since its insurance paid the bulk of the $100,000 agreement.

“Not one dime was paid to the plaintiff [Ledonne],” he said, referring to the common practice of insurance payments going to public-interest law firms or private lawyers who represent clients like Ledonne.

Salazar suggested that Ledonne’s grievances were trivial compared to the violence against protesters at Kent State during the Vietnam war.

“I look back on the recent controversy on our campus and think, ‘How could this issue rise to the level of importance that a student movement is?’ I don’t get it,” Salazar said. “Protests should be about something more important than someone’s narcissistic fantasies. The settlement was a way for us to refocus our attention on what exactly is important.”

The rest of the article focused on criticism of Ledonne and his website. Prof. Beth Robinson, chair of the music department, said she feels “strongly” about freedom of speech, and then asked: “What are our options for rebutting and shutting down this slander and cyberbullying?”

Fliers torn down around campus

Ledonne isn’t without supporters, judging by the “reader comments” he posts at his blog, though few are publicly identified.

One that is, from former student trustee Meagan Danyelle Smith, says she was at the trustees meeting and didn’t realize there would be “so many negative comments” about the settlement, or else “I would have prepared something on your behalf.”

The part where Salazar said Ledonne “had not received a check from the settlement was for lack of a better word bogus,” Smith wrote. Also adviser to the Black Student Union, Smith said that Ledonne was the “true piece in what helped us retain and graduate diverse students.”

More than one reader told Ledonne that fliers for the march had been torn down this week.

“I don’t know who thinks this is OK … but they are wrong,” one reader wrote. “Those bulletin boards contain adds [sic] for tattoo shops and the Christian Mind, but issues at ASU aren’t fair game?”

Another wrote: “Clear message: don’t dare express unpopular opinions or speak up for yourself or others. It’s clear that losing the ACLU lawsuit taught ASU leaders nothing… bogus press releases, trying to stop the march… [sic]” (Adams State has repeatedly disputed the characterization of the settlement as a loss, since the case didn’t go to trial.)

Ledonne wrote in his email to The Fix that “the fear of retaliation on the ASU campus is very real, very palpable,” and he suffered the consequences by “being someone willing to persist in making their concerns known” about how the school was run.

The school’s police chief even sent an open letter to the campus community, noting the professor had previously designed a videogame recreation of the Columbine High School massacre and saying he made many faculty and staff “uncomfortable.” (Ledonne claims the school knew about his videogame before his 2011 hiring.)

One example of alleged retaliation, according to Ledonne, is the de facto disbandment of the Campus Advisory Group, an official shared governance body. He said its remaining members stopped meeting last fall because so many others had “resigned” under perceived pressure or their contracts weren’t renewed. (Ledonne himself was issued “persona non grata” status, which required ASU to hastily adopt such a policy.)

Ledonne said he knows of “several other legal claims against ASU for wrongful termination” and several employees who are “actively contemplating litigation.” But others are wary of stirring the pot because ASU’s geographic location has “very poor economic opportunities,” in contrast to other university towns in Colorado.

The administration “has enjoyed a kind of immunity from more careful scrutiny and accountability for a very long time” because ASU is considered “the only game in town,” he said.

Ledonne told the Denver alt-weekly Westword last fall that his banishment from campus was effectively his exclusion from public life in the small town of Alamosa.

Adams State did not immediately respond to a request for comment from The Fix.

UPDATE: This article has been amended to clarify that Ledonne publishes the blog Watching Adams, but it includes content from anonymous contributors.