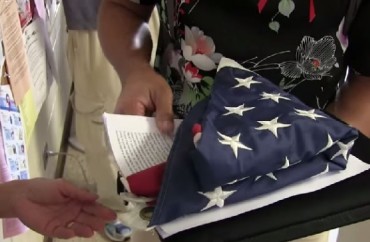 University of Hawaii at Hilo campus officials will spend $33,000 to install two new flag poles after protestors complained they did not like how the American flag was flown above the Hawaiian state flag on the old pole – and even took down the U.S. flag in protest.

Administrators agreed to install the two poles so both flags can fly at the same height, Hawaii News Now reports.

“When UH systems researched into it we found that a lot of the new state buildings coming out, including the state capital, that was basically the new standard operating procedure, that the flag poles were of equal height,” campus spokesman Dan Meisenzahl told the news outlet. “And so it just made sense for us.”

For the last eight months the flagpole at the Hilo campus has reportedly stood bare as administrators grappled with the controversy in which so-called “Hawaii sovereignty activists” took down the American flag.

“On Dec. 1, Hawaiian sovereignty activists lowered the American flag on the single pole at the front entrance to the UH-Hilo campus and hoisted the Hawaii state flag that previously flew beneath. They folded the U.S. flag and delivered it to administrators, along with demands that the Hawaii flag be shown preference when the flags are raised,” the Hawaii Tribune-Herald reports. “The flagpole now will be replaced by two new flagpoles featuring lockable, internal halyard systems, which will prevent unauthorized people from lowering and raising flags.”

” … Joseph Kaolulo, one of the Hawaiian students involved in the effort to take down the U.S. flag in December, said Tuesday he viewed the decision by UH-Hilo to place the flags on equal footing as an admission of guilt about what he called the United States’ ‘illegal occupation’ of Hawaii.”