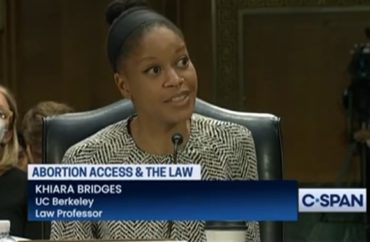 Senator Josh Hawley is “transphobic” and made gender dysphoric individuals vulnerable to abuse because he asked if men could get pregnant, according to one professor.

Professor Khiara Bridges, who teaches law at the University of California Berkeley, made the accusation on Tuesday during a Senate hearing about abortion.

“You’ve referred to ‘people with a capacity for pregnancy,’ would that be women?” the Missouri Republican asked.

Hawley asked if that meant that abortion is not really a women’s rights issue.

“So your view is that the core of this, this right then, is what?” Hawley asked, after Bridges said that abortion “impacts women” but can that it “impacts other groups.”

“I want to recognize that your line of questioning is transphobic and it opens up trans people to violence,” Bridges said.

She then said that “one in five transgender people has attempted suicide” and that asking questions about pregnancy “denies that trans people exists.”