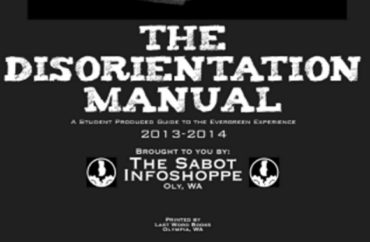 A cache of documents recently unveiled highlight that radicalism and anarchy has been pushed at Evergreen State College since at least 2008.

The documents were exposed by a disgruntled, anonymous Evergreen graduate in a blog post published earlier this month amid upheaval at the public university. The documents consists mainly of “Disorientation” manuals produced by a campus anarchist group that denounce police, capitalism and banks, and argue shoplifting is a form of “survivalism.” They also tick off examples of cultural appropriation, such as mohawks, and declare “manifestation of white privilege is all around us.”

The blogger, listed only under the screen name of “Son of Tuck,” claims a “pervasive element” has existed at the campus for years and more recently gained control of it.

“The college isn’t bad. It just got taken over by a domestic terror cell,” writes the blogger, for which contact information is unavailable. The College Fix was made aware of the blog by an anonymous source.

Disorientation guides are not unique to Evergreen. They’ve popped up in the past at Columbia, Amherst, and even Middlebury College, where earlier this spring students, faculty and outsiders violently protested a conservative guest speaker’s speech, a melee that left a professor there with a neck injury.

A campus in crisis

The revelation of the Evergreen documents comes amid massive turmoil at the public college in Olympia, Wash.

Last month, students cornered and shouted at biology professor Bret Weinstein over his objection to a “Day of Absence” event that asked white students and faculty to leave campus for a day. Protesters demanded he be fired. Many faculty called for Weinstein to be punished.

The events have left campus in disarray. Unspecified threats closed the college for several days. Meanwhile, a group of vigilantes took to patrolling campus with baseball bats.

The current turmoil cannot be directly linked to student anarchists.

However the disorientation manuals, produced in the past by a student anarchist group known as “Sabot Infoshoppe,” amount to radical, far-left manifestos that include writings expressing anti-corporatist and anti-police views, the latter of which is a main complaint among protesters today.

Other issues discussed in the manual include white privilege, food justice and what local businesses students should boycott.

A history of radicalism

Recent events at the public university are hardly the first time that left-wing students have stirred controversy on campus. A school known for its progressive reputation, past events show the roots of left-wing activism are embedded in the school’s past.

For example, Evergreen was the site of an anti-police riot in 2008 and played host to an anarchist workshop in 2013. In 2006, some students even protested at the commencement speech of Washington’s liberal governor.

As for disorientation: Mohawks are cultural appropriation. Banks invest in operations that often hurt humans. Shoplifting is a form of “survivalism.” Those are just a few things stated in the 2013-2014 “Disorientation Manual.” It spans 99 pages and includes anonymously written articles touching on issues ranging from protesting tips to discussion of neo-Nazis.

“Depending on where you’re from, issues such as race priviledges [sic] or food politics may or may not have occured [sic] to you before,” the document states. “But, be sure, they will come up in seminar. We want to prepare you here with overviews of such inflamatory [sic] ideas to help you begin your process toward a life of thinking more critically and empathetically.”

According to the blog post written by the Evergreen graduate, the “Disorientation Manual” has been an annual tradition for Sabot Infoshoppe. The blogger posted photos showing the 2008-09, 2009-10 and 2010-11 manifestos.

Disorientation Manual 2013 by The College Fix on Scribd

The blogger, who says they graduated from Evergreen in 2012, states “I picked up my copy every year at their booth during Orientation week” and adds “people knew about the DisMan.” It unclear how widely the documents were distributed.

Today, Sabot Infoshoppe is not listed as an official student group on the university’s website and it’s unknown if a disorientation guide was made for the 2016-17 school year.

‘Evergreen increasingly radicalized over the years’

But “I feel compelled to come forward with evidence that the school has allowed student groups (at best) or domestic terrorists (at worse) to indoctrinate freshman into their extremist ideology,” the blogger writes.

“Son of Tuck” posits that recent events on campus, specifically the protest of Weinstein, haven’t occurred in a vacuum. The blogger argues the school, and the community around it, has had a radical strand for years.

“There has been dissent brewing in Olympia (The ‘All-America’ City 86-87) for a long time, and Evergreen has been increasingly radicalized over the years by a small but ever-growing group of what I will call domestic terrorists,” the blogger writes.

According to an online flyer for a past Sabot Infoshoppe meeting, the group was described as having “a history of radical speaking events, workshops, and movie nights, as well as a former space for books, zines, and dvds.”

The group’s 2013-2014 booklet describes Evergreen as a school with a progressive student body, but rails on an administration described as too closely tied with corporate interests.

“However, underneath this revolutionary reputation lies a hierarchical institution that often resembles the fucked up shit in society that we are considered radical for opposing,” it states.

Its guide states “manifestation of white privilege is all around us” and diversity isn’t great at the college. It alleges that examples of white privilege at the school are when white students control discussion during seminars and also include cultural appropriation “via hairstyles such as mohawks or dreadlocks.”

The manual also includes anti-police and anti-bank sentiments, telling students that “banks are totally fucked.” Law enforcement is brought up multiple times throughout the document, with one article alleging police benefit the wealthy.

“Sure, there are the random anecdotes of an officer rescuing a cat or catching a burglar. But, in reality, most police officers (and the Olympia Police Department [OPD] is no exception here) spend much of their time harassing poor people and protecting the interests of the rich and powerful,” the reading states.

The recent events at Evergreen aren’t the only time radical, left-wing students have held protests on campus. In fact, the school was the site of a riot in 2008 during a concert held on campus. After a campus police officer took a suspect into custody, the crowd shouted at the officer and then later damaged the officer’s vehicle. Multiple students were arrested over the incident, according to The Seattle Times.

In 2013, the campus was site of an anarchist workshop that was moved off campus after an attendee got in a scuffle with a blogger attempting to take pictures of the event.

Liberal students apparently protested at the college’s 2006 commencement over speaker Christine Gregoire, who was then the Democratic governor of Washington. According to the “Disorientation Manual,” students turned their back to Gregoire as she spoke and held up signs. A banner at the event reportedly read “Gov. Gregoire Please Stop Your Racist Welfare Policies.”