‘If evangelicals don’t change, they pose an existential crisis to us all … their racism, their sexism, their homophobia, their lack of belief in science, lack of belief and common sense may end up killing us all’

Racism and the lost cause of the Confederacy is alive and thriving among today’s white evangelical Christians, argued three religion professors featured on a recent panel hosted by the University of Virginia titled “White Evangelical Racism: The Politics of Morality in America.”

“I think that a strong and compelling argument can be made that it’s not just this lost cause narrative that still animates white evangelical Christianity wherever it exists, whether it’s on the West Coast, in the south,” said Larycia Hawkins, assistant professor of politics and religious studies at UVA.

“I lived in Chicago for 10 years and I came away telling my friends, upon reflection… the Midwest is Confederate. In fact, America is Confederate,” Hawkins said during the event.

The panel also featured Anthea Butler, associate professor of religious and Africana studies at the University of Pennsylvania and author of the new book “White Evangelical Racism: The Politics of Morality in America.” 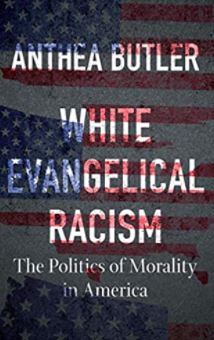 Butler, during the panel, argued that evangelicals who say they “don’t see color” promote “colorblind racism” since those who are evangelical are expected to act “white” and vote in ways that uphold white supremacy.

“When people say to you, ‘I don’t see color, I see what Jesus sees in you,’ that really actually means that they just see white,” she said.

“And that people who are in evangelicalism, like I was in previously, are considered to be white if they behave in certain kinds of ways. And if you don’t behave in those kinds of ways, or if you don’t accede to white evangelical cultural norms, that means that you are not acceptable,” Butler said, noting later in the webinar that “evangelicals are willing to die for whiteness.”

Butler said it’s not about theology, it’s about a position evangelical Christians have taken “that is taking us all over the brink.”

The third panelist, UVA Professor of Religious Studies Charles Mathewes, who is white, suggested that Butler’s book helps explain why so many evangelical Christians voted for Donald Trump and “reversed” their position that “personal morality mattered in the selection of leaders.”

He argued her book does an “enormous service” by exposing “the idea that there is a propriety to white silence” and by “actually saying the things that need to be said.”

In addition to accusing evangelical Christians of being white supremacists, Hawkins argued during the webinar that it’s wrong to be entrepreneurial and patriotic.

“This is one of the things I hope we get to discuss more is this sense that American entrepreneurialism is woven through white evangelicalism, which is Americanism, which is patriotism. To be American is to be white, is to be Christian, at least modally, right. And that it’s a winsome white racism that’s described here,” she said.

Hawkins is no stranger to making controversial statements. In 2015, when she worked as a professor at the Christian Wheaton College, she famously wore a Muslim headscarf during Advent and argued Muslims and Christians worship the same God.

Butler is also often in the headlines, most notably when she called God a “white racist” in 2013.

A transcript of the one-hour panel has been published by the University of Virginia.

One concerned alumnus argued that the statements made by Professor Hawkins and the other panelists during the April 6 webinar constituted “school-sponsored hate speech” against evangelical Christians.

“Members of UVA Department of Religious Studies faculty have unloaded on white evangelicals in as wide-ranging and comprehensive an example of collegial vitriol as you will ever watch or read,” wrote James Sherlock in a May 16 column on Bacon’s Rebellion, a political blog based in Virginia.

Sherlock noted that he would be filing formal hate speech complaints against Hawkins and Mathewes  as well as the Religion, Race and Democracy Lab at UVA, which hosted the event.

On May 22, Sherlock informed readers that University of Virginia President James Ryan had written to him to tell him that the university was looking into the matter.

UVA Spokesperson Brian Coy provided The College Fix a copy of the email President Ryan had sent Sherlock and confirmed that the university was aware of the webinar as well as the concerns some have raised about its content.

But administrators have since decided the issue no longer needs further review.

“Our Provost and the Dean of the College looked into this and concluded that while the panel raised ideas that could certainly be deemed controversial, it was an entirely appropriate academic endeavor and did not violate any university policy,” Coy told The College Fix in an email.

“The free exchange of ideas, even if those ideas are controversial, is a core value of the University of Virginia from its very founding. University Leaders are constantly striving to protect that principle, while fostering a civil environment where speech and scholarship advance people’s understanding of each other rather than dividing them.”

‘If evangelicals don’t change, they pose an existential crisis to us all’

Hawkins, in her comments during the seminar, had also criticized Christians for their “inability to see that the capitalist economy might be the antithesis of God’s economy and even radically different than the one envisioned by Adam Smith.”

“This entrepreneurial kind of awakening that is kind of baked into white evangelicalism is quite limited,” she said. “It can’t envision a world beyond colonialist Christianity. They’re not even neocolonialists. It’s just straight up colonialist Christianity to this day. Cedric Robinson talks about Black Marxism. And I think that this conversation can’t be even entered into alternative economies.”

In the webinar, Butler describes how she wrote “White Evangelical Racism: The Politics of Morality in America” to answer certain questions she personally had about American evangelicalism.

“Why does morality mean so much for evangelicals?” is another question Butler said she originally grappled with and believes her book answers.

In her book, Butler argues that “evangelicalism is synonymous with whiteness.”

“It is not only a cultural whiteness, but also a political whiteness,” she writes. “The presupposition of the whiteness of evangelicalism has come to define evangelicalism, and it is the definition that the media, the general public and the politicians agree on.”

At the very end of the webinar Butler goes so far as to claim that evangelicals represent an existential threat to humanity itself.

“As much as I hate to say this, I’m going to put it this way. If evangelicals don’t change, they pose an existential crisis to us all. They have divided the nation politically. They don’t want to believe in climate change. They don’t want to get vaccines as we’ve seen in The New York Times. They are part and parcel of the reason why we cannot move forward, because they say they have religious beliefs,” she said.