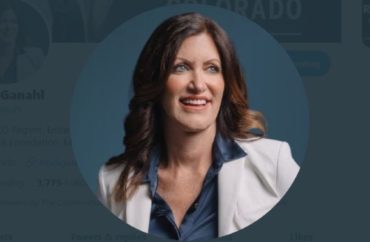 Heidi Ganahl is a Republican leader in the state of Colorado who some see as perhaps a future U.S. senator or governor for the GOP.

But right now, Ganahl says she is gratified to serve as an elected member of the University of Colorado Board of Regents, where she has steadfastly fought for free speech, tuition cuts and intellectual diversity over the last three years.

Ganahl says she feels very blessed to have lived the American dream and has made it her life’s mission to ensure that future generations can benefit from the same opportunities and freedoms she has been fortunate to experience.

“I started out with nothing from a family who didn’t have a lot of resources, but I was able to find success building a business,” Ganahl told The College Fix. “I’m very committed to giving back and making sure future generations can live the American dream like I did.”

Before building her business, Ganahl worked as a pharmaceutical saleswoman, a certified financial planner, and a baby-bedding catalog owner — but none of these careers sparked her passion.

In 2000, she decided to follow her passion, which is dogs, and opened the first Camp Bow Wow – a canine day-care center. When she decided to sell the company in 2014, she had grown it into a $100-million-dollar brand.

In addition to her time as a business owner, Ganahl has held board positions with the Denver Venture School, the Metro State Center for Innovation, and the Leadership Program of the Rockies.

While she built her business, Ganahl says she became frustrated with government overregulation and how much it affected her ability to grow her company. It motivated her to begin advocating for public policy to help small businesses and entrepreneurship.

Her advocacy for less regulation and more economic freedom opened the door to future opportunities, and she was soon approached about running for regent in the 2016 election.

“When I was asked if I wanted to run for regent, I asked, ‘what the heck is a regent?’” Ganahl told The Fix. “Once I figured out what it was, I thought it would be a really good fit for me. I love Colorado University, and I love helping young people.”

Colorado is one of four states where regents are elected in statewide elections. Ganahl, running as a Republican, earned the seat in a tightly contested race. Her term runs from 2017 to 2023.

Since her election, Ganahl has been relentlessly outspoken about the importance of free speech in the University of Colorado System. It’s one thing to talk about the issue, but she is proactive.

Ganahl in 2018 helped lead the charge to fight for policies to protect intellectual diversity in Colorado’s public universities by founding the Free to Be Coalition to promote diversity of ideas and free speech on college campuses.

“It’s most important to create a culture at universities that support academic freedom and free speech robustly. We talk about it a lot, but we’ve got to have teeth and impose consequences when speakers are shouted down or moved off campus,” she told The Fix. “As regents, we need to have our students’ backs and make sure they understand the process to file complaints and have the courage to speak up for themselves.”

As a former business owner, Ganahl says she also finds herself increasingly frustrated with the wasteful spending and inefficiencies of the University of Colorado System. She says she believes that cutting administrative costs and unnecessary course offerings will allow the system to lower tuition costs and reinvest in students.

“I’m a strong advocate for funding the student, not the system. We should be putting as much money into the classroom as possible because that’s how you hire great faculty, and that’s how you support student’s learning. We shouldn’t be hiring more administrators or Vice-Chancellors of this or that. We’ve got to get the money back into the classroom,” she told The Fix.

As seems to be the case with every major institution in America, higher education is becoming more politicized, and the University of Colorado System is not immune. Democrats regained a slim majority on the board in November and immediately began taking steps to remove the system president, former Republican Congressman Mark Kennedy.

First came a censure from students and faculty that accused Kennedy of failed leadership in diversity, equity and inclusion and a lack of shared governance.

In May, Kennedy announced he would step down, and the regents voted to approve a transition agreement that ended Kennedy’s contract a year before it was set to expire.

Ganahl said after the vote, “Mark Kennedy is being fired for the high crime of not being a Democrat or left-wing academic to a new board majority who many days forget that they serve the students of CU and not the (Democratic National Committee). In this case, their need to grind partisan axes will cost taxpayers, students and the university millions of dollars.”

“I’m very concerned about the state of higher education in Colorado, but I’m going to keep advocating for intellectual diversity and supporting students who want to speak out or have different views,” Ganahl said.

Having established herself as a successful business owner, a philanthropic community leader, and a tenaciously principled regent, Ganahl’s name is being floated as a possible future candidate for higher office.

When asked by The College Fix what her future holds, Ganahl reiterated her commitment to students and their families.

“I just want to keep doing everything I can to protect the American dream and keep it alive for the future generation,” she said. “I have four kids, and it’s incredibly important that I continue that work. I’ll keep my options open, but I’ll always be an advocate for viewpoint diversity.”