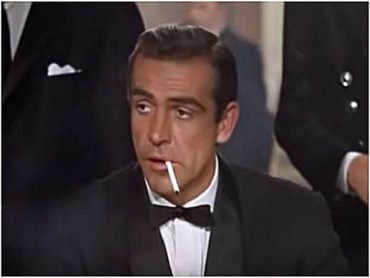 In print, thank goodness, not in the movies.

The Telegraph’s Hannah Furness reports that Mortis features “a cast of new characters to point out the error of his chauvinistic ways, including messages about smoking causing cancer, women who give him a run for his money, and an ‘outspoken’ gay friend.”

This is an example of what writer Mark Judge dubs “retroactive repression” — “the desire to imbue yourself with modern virtue by expressing disgust with America’s sins [of the past.]”

While I don’t necessarily agree with Judge’s assessments regarding some of the films he mentions, the term is an apt one.

I mean, seriously? Bond worrying about cancer … because he smokes? Consider Daniel Craig’s statement to M in Casino Royale: “I understand double-Os have a very short life expectancy.” It sure isn’t due to smoking. Indeed, such simple pleasures are exactly that in which 007 indulges because of his short life expectancy. His objectification of women is another (also addressed in Casino, by Vesper Lynd: “You think of women as disposable pleasures …”).

The Image Comics company is enamored with retroactive repression stories. Back in 2011 it published a title called The Big Lie, a time travel tale which supposedly tells “the truth” about the 9/11 attacks.

Even more pathetic is its Red One, a more recent story about undercover communist agent Vera Yelnikov who, in 1977, ventures to the US and ends up doing battle with a right-wing (of course!) group of vigilantes engaged in fighting pornography and social refuse:

Too bad the script makes no sense: Vera is supposed to be passing herself off as an American superhero, yet she carries a hammer and sickle, jumps through windows in a red suit, and calls herself Red One.

More importantly, Red One turns on its head one of the core beliefs of communists during the Cold War. The Soviets argued that American culture is decadent — which was why it was doomed to weakness and ultimate failure. It’s unlikely that a Russian secret agent in 1977 would have soft feelings for drugs, pornography, or homosexuality. Making Vera sympathetic to these things, even defensive of them, is like claiming Nazis were art lovers.

Ah, but aside from the usual Hollywoodish penchant for making its villains conservative, it glorifies our former enemies with the not-so implicit message that “we just misunderstood them” during the Cold War. Even 25 years after the McCarthy era.

The retroactive repression witnessed in the entertainment industry is merely a manifestation of what is often encountered in the modern academy.

You know the drill: The Founding Fathers, you see, are akin to the Nazis, and the fact that anyone continues to hold them in high esteem is itself a loathsome undertaking.

Some of the Founders, too — gasp! — owned slaves thus making them automatically abhorrent.

In this age of perpetual grievance, we’ve done a 180 from the (equally wrong) past glorification of everything American and Western to blaming it for the ills of virtually the entire planet.

Not to mention, in the zeal to be “all-inclusive” the resulting historical narrative sometimes makes little factual sense.

It’s very easy to sit on our early 21st century perches and judge those who came before us by our current political, cultural, and moral standards, is it not? Hell, why even bother believing in evolution if we expect our forebears to already possess what we cherish currently, right?

Just keep mind this entertainment moment in mind from the Star Trek: The Next Generation episode “The Neutral Zone”: After encountering three late-20th century cryogenically preserved humans and then having to deal with their myriad idiosyncrasies, Commander Riker says to Captain Picard “Makes one wonder how our species survived the 21st century.”