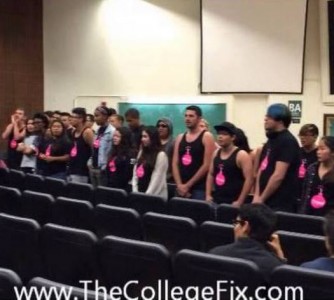 ISLA VISTA – More than 20 UC Santa Barbara students disrupted the start of a talk on campus in support of traditional marriage on Tuesday night with a rowdy protest that included loud chanting and crassly worded signs.

The featured speaker – Dr. Jennifer Roback Morse, a former Ivy League professor and founder and president of the pro-traditional marriage nonprofit Ruth Institute – left the stage and attempted to engage the protestors in conversation, but they would not stop shouting.

The chanting lasted for about four or five minutes, then the protestors marched out of the lecture hall, allowing the event to continue without disruption. After the protestors left, about 45 students, scholars and community guests remained and listened to Morse’s lecture:“Same Sex Marriage: Why Not?”

The talk was sponsored by the newly formed UCSB Anscombe Society, which aims to promote sexual purity and the traditional family on campus.

Morse works to help what she calls the Sexual Revolution’s victims. Morse taught economics at Yale and George Mason universities for 15 years and also served as a research fellow for Stanford University’s Hoover Institution from 1997 to 2005. The event had been highly publicized through an email to the 20,000-member campus community as well as through fliers hung on doors at dorms and apartment complexes near the university.

“Whatever one’s views on this very important and contested question may be, we invite and encourage all to attend to critically interact with the speaker’s arguments and to ask tough questions during the Q&A in the interest of encouraging intellectual engagement on this issue,” the Anscombe Society’s invitation to the campus community had stated.

As this was the Anscombe Society’s first official event, it was uncertain how many people would show up. Campus officials had asked society members to purchase security for the talk. However, after the group’s student president, Carlos Flores, got an attorney involved, the fees were dropped, he told The College Fix.

If an event on campus is anticipated to have any sort of backlash, organizers are usually required to pay fees for security guards or police officers. In this case, four campus security officers lined the back of the lecture hall, paying close attention to the protest but allowing it to proceed.

As for Morse’s talk, her argument against gay marriage primarily revolved around protecting the child and his or her right to grow up in a home with a mother and father.

“Kids need and deserve their own parents, and same-sex marriage will enshrine into law the opposite,” she said.

She added: “Genderless marriage is going to create genderless parenthood.”

According to her online bio, Morse is “convinced that children need relationships with their mothers and fathers and that marriage provides the most reliable way of assuring that children receive this.”

“And she came to believe that our toxic sexual culture lies at the root of our crumbling marriage culture. She is passionately dedicated to inspiring the victims of the sexual revolution to become survivors and ultimately advocates for positive change.”