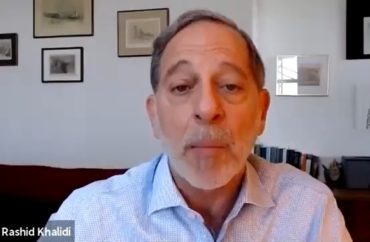 Says Palestinian war crimes need to be understood in ‘context’

A professor of Middle Eastern politics who compared supporters of Israel to rodents, recently spoke at Rutgers University where he spoke about Palestinian attacks on Israel and argued for understanding its actions in a historical context.

Columbia University Professor Rashid Khalidi, who wrote a book called “The 100 Years’ War on Palestine, started by talking about the “extreme violence” between Israel and Palestine. The professor has previously made comments that drew criticism of anti-Semitism about Israel.

In 2017, as President Donald Trump prepared to enter the White House, Khalidi warned of Israeli supporters gaining influence in the administration.

“These people in fact infest the Trump transition team, these people are going to infest our government as of January 20, and they are hand in glove with a similar group within the Israeli government,” Khalidi said in an interview.

“That’s a very manifestly Semitic rhetoric — Jews as vermin — for a supposedly refined albeit pro-Palestinian Columbia prof and Pres. Obama’s former mentor. This kind of statement deserves attention,” Eugene Kontorovich, a Northwestern law professor who is now at George Mason, said at the time.

While Khalidi clarified his comments, he continued his opposition to Israel during the event at Rutgers, hosted by its law school’s Center for Security, Race and Rights.

The College Fix reached out to Sahar Aziz, the center’s director, and asked for the motivation behind inviting Khalidi and if the center knew about his comments prior to the invitation. The Fix has not received a response to the email sent more than a week ago.

Khalidi said the narrative is usually “Israel-favored” and focuses on who attacks first, an approach he opposes. He said Gaza has been “imprisoned” and they’ve been prevented from obtaining products such as building materials and medicine.

“Israel loves to start by talking about” the rockets that come from Gaza, which Khalidi said could be a “war crime” though they need to be understood in “context.”

While the Palestinians may commit war crimes, Khalidi said, Israel’s actions need to be examined.

One example included Israel’s “eviction of people from their homes, dispossession of families in Sheikh Jarrah.”

“Families were dispossessed on the basis of property claims by Israeli settler organizations to property in east Jerusalem,” the Columbia professor said.

Evicted families never had a legal right to the land

The situation, which continues to work its way through the Israel court system, involves families who never had a title to the land, according to The Journal of International Security Affairs, a pro-Israel publication.

“For starters, the title to the land never belonged to the Palestinian Arabs currently residing on the property,” JINSA said. ”There is nothing pernicious happening beyond a standard landlord eviction of non-paying tenants.”

Khalidi said that this is just another example of how Israel has expelled people since 1948 to create the country.

The next criticism of Israel is how it entered a mosque on Ramadan night this year.

“Israeli forces on a Ramadan night, when worshippers were praying, entered the plaza around the mosque….and then fired tear gas and stun grenades into the mosque,” Khalidi said.

He compared it to the hypothetical of someone attacking Catholics at St. Peter’s Basilica in the Vatican City on Easter.

The mosque he is referring to is Al Asqa Mosque, also called the Temple Mount, where Muslims had “stockpiled rocks, fireworks, and other objects inside the mosque to throw at Israeli Police,” according to the Times of Israel.

Though Hamas attacks Israel, their weaponry is not nearly as advanced as Israel, so it should be viewed differently, than when Israeli Defense Forces attack Gaza, Khalidi said.

“The weapons that Hamas uses are so inaccurate that they are necessarily indiscriminate,” Khalidi said. “It’s almost like falling off a rock to say that these are violations of international law. Israel is using weapons that it is capable of using discriminately, and is killing civilians disproportionately.”

He ended his lecture by saying that Middle East peace won’t happen “unless and until the situation in the Arab countries changes for the better as far as democracy is concerned.”