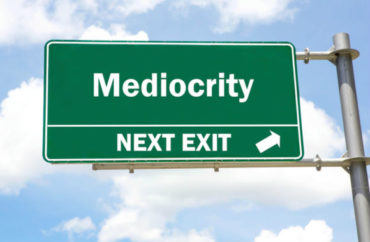 Way back during my first few years of teaching, a fourth-year educator at an adjacent district took to the pages of Delaware’s largest daily to rip his superintendent (who later became the state’s education secretary) and school district for “continuing a policy of banning Advanced Placement classes.”

Why would they do such a thing? Because they are “elitist” and might damage the self-esteem of students not enrolled in them.

Over twenty years later, the largest school district in the country is considering scrapping most gifted/talented programs in order to achieve a racial balance. Too many whites and Asians inhabit the programs currently. New York Mayor Bill de Blasio has a lot of power at his fingertips; he can adopt all, some, or none of his appointed “high-level panel’s” recommendations. It’s unlikely he’ll choose the last option.

The panel suggested replacing gifted programs with magnet schools, as well as scrapping “standardized exams or other academic prerequisites” at the elementary and middle school level. High schools would be saddled with “diversity requirements.”

(As an aside, I’ve always been against exam/GPA requirements for specialized public schools. Publics are supposed to serve everybody regardless of ability; selecting students via exams, etc. effectively transforms schools into private entities. Doing away with such admissions criteria, however, does not mean gifted/honors programs, AP classes, etc. have to follow suit.)

New York’s sentiment also is evident at UC-Santa Barbara where the student paper Daily Nexus recently took at look at how diverse the college’s Honors Program is. If you’re obsessed with progressive social justice, the paper’s discoveries may appear ominous.

Though UCSB as a whole ranks 14th in US News & World Report’s “Best Ethnic Diversity” rankings, its Honors Program stats are quite different: “Chicanx/Latinx and Black/African American populations in the [program] represented less than half of their respective proportions in the student body.”

And some in those groups aren’t happy.

“Absolutely not,” said Veronica Eseka, a black UCSB Honors student when asked if she thought the program was “for her.” The sociology major invoked a rather dated stereotype by claiming that when people think of “really, really smart” individuals, they think of “the white man” … not someone like her.

Eseka also complained about her peers’ (alleged) perceptions of her: “You might get second looks, like ‘Are you in the right place?’”

As is typical of such stories, the disproportionate — high — percentage of Asians and Asian-Americans in the Honors Program (7.3 percent higher than their general UCSB population) doesn’t seem to be a big deal. But for every other minority demographic, advocates say efforts should be made to attract and retain students.

One measure was dropping the GPA requirement from 3.6 to 3.5 three years ago, according to UCSB Associate Vice Chancellor for Undergraduate Education Jeffrey Stopple. Stopple believes a student’s grade point average is a “crude metric” and said he “would prefer to do something different” other than use “purely quantitative measures.”

The National Honor Society long ago succumbed to this notion: Academics are valued at a mere 25 percent of its admission criteria. The others include the non-“purely quantitative measures” of character, leadership, and service.

Is this really what we want as a society? Top-rate academic programs based on feelings and esoteric subjective evaluations?

As that fellow First State teacher wrote sarcastically over 20 years ago, “This makes sense. We wouldn’t want the best and the brightest to do their best.”