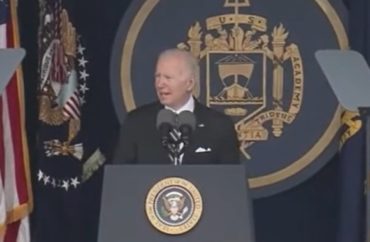 Latest in a series of tall tales

Where is Nina Jankowicz and the Department of Homeland Security disinformation board when you need it?

President Joe Biden told graduates of the U.S. Naval Academy on May 27 that he received an appointment in 1965 to the Navy officer school.

But this claim seems to be false, based on the fact that in 1965 Biden graduated from the University of Delaware and the Naval Academy does not offer graduate degrees.

He began his speech by saying that he “was appointed to the Academy in 1965 by a senator who I was running against in 1972.”

“Never planned it that way. I wasn’t old enough to be sworn in. I was only 29 years old when I was running,” Biden said. “He was a fine man, and his name was J. Caleb Boggs.”

He claimed Delaware Democratic Senator Boggs told him during a debate that if Biden had accepted his nomination to the academy, “you’d still have one year and three months active duty, and I’d have no problems right now.”

A nomination to a military academy does not guarantee acceptance to it. Representatives and senators can nominate someone from their state or district, but the military academies must still accept them and offer them admission.

“Biden’s 2008 autobiography ‘Promises to Keep’ does not mention the Naval Academy,” the New York Post reported.

The newspaper noted Biden’s history of making false statements, including a claim in September that he had spent time at the Pittsburgh Tree of Life synagogue prior to a deadly shooting in 2018. He clarified that he was referring to a phone call in 2019.

He also spoke in September at a lumber company and claimed it had offered him a job, though there’s no record to prove this and he had never mentioned it before that day.

It seems unlikely that Biden, a Pennsylvania native who moved to Delaware and went to law school in New York, would have applied for a lumber job in Idaho while finishing up his legal studies.

“In January, Biden told students of historically black colleges in Atlanta that he was arrested during civil rights protests — for which there also is no evidence,” the Post reported. Biden also falsely claimed law enforcement arrested him in South Africa when he was trying to see Nelson Mandela in prison.

Biden dropped out of the 1988 presidential primaries after being caught plagiarizing speech content from a British politician. That’s not to be confused with his plagiarism in law school at Syracuse University.

He also repeatedly claimed, falsely, that the driver who tragically killed Biden’s first wife, had been drinking.