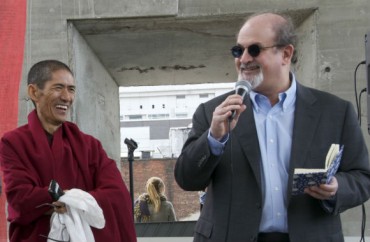 The controversial novelist and new “writer in residence” at New York University, who spent more than a decade in hiding from murderous Islamists, has a few things to say about today’s academic climate.

In an interview with NYU’s in-house magazine, Salman Rushdie talked about his new novel Two Years Eight Months and Twenty-Eight Days as well as his new life motto, “I’m all done with being careful”:

Anybody who’s going to walk into my classroom is going to have to know that I’m going to say what I have to say and if they don’t like it, they don’t have to be there. But no, I think I am a little worried about all this business of trigger warnings and so on. I mean, I was quite encouraged by the fact that Columbia decided not to put trigger warnings on its books and I would hope that most universities would make that decision because I think that the idea that a university is a place where young people are cocooned and protected from things that will challenge and upset them seems to me is the exact opposite of what a university should be. A university precisely should be the place where young people are challenged and made to question what they’ve taken for granted and learn by doing so. That’s the kind of safe place a university needs to be—a safe place for ideas, not for sentiments.

Rushdie talks about his criticism of some members of the writers’ defense organization PEN. They tried to stop the group from honoring Charlie Hebdo following the terrorist attack on the satirical magazine’s office:

Read the rest of the interview.