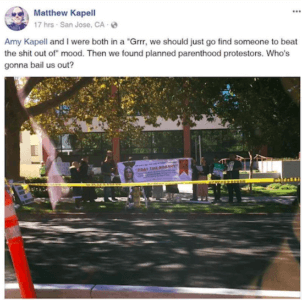 A screenshot of a Facebook post apparently made by an instructor at a California public university shows the instructor openly plotting to violently assault anti-abortion protesters.

“Amy Kapell and I were both in a ‘Grrr, we should just go find someone to beat the shit out of’ mood,” the post, attributed to San Jose State University lecturer Matthew Kapell, reads. “Then we found planned parenthood [sic] protesters. Who’s gonna bail us out?”

The College Fix reached out to San Jose State University for comment. University spokeswoman Patricia Harris told The Fix: “I am looking into this.” Harris then requested a link to the post, which The Fix provided.

UPDATED: Patricia Harris supplied The Fix with this statement from the university: “Thank you for bringing this to our attention. We have confirmed that Matthew Kapell is a part-time temporary faculty member who teaches two courses at SJSU. SJSU will respond appropriately.”

Harris did not immediately respond to a request for clarification regarding the university’s intended response.