Vermont Sen. Bernie Sanders and Massachusetts Sen. Elizabeth Warren together collected over 60 percent of the nearly $1.2 million donated to presidential candidates by employees of Big Ten Conference schools since 2018, according to an analysis by The College Fix.

These contribution levels are one measure of the political balance at large state schools in many of the 2020 battleground states (Pennsylvania, Michigan, Ohio, Wisconsin.)

Both Sanders and Warren saw their largest hauls from the University of Michigan, with Sanders collecting $59,000 and Warren raising $52,000 from Michigan employees.

Republican President Donald Trump, the incumbent, collected $16,000 from Big Ten schools, or 1.4 percent of total contributions. Trump does not have a competitive primary opponent.

Former South Bend Mayor Pete Buttigieg collected $242,000 from Big Ten schools, or 20.3 percent of the total. Buttigieg’s largest single contributor was his home state Indiana University, where he collected more than any other candidate.

Minnesota Sen. Amy Klobuchar raised $108,000 from Big Ten schools, although more than half of her total amount ($59,000) came from her home state University of Minnesota.

The least politically active campus as measured by campaign contributions was the University of Nebraska, whose employees only contributed a total of $19,500 to presidential campaigns.

Last week, The Fix reported that Sanders and Warren had collected nearly two-thirds of all contributions from employees of Ivy League universities.

For branding purposes, the Big Ten Conference continues to count 14 schools as members. 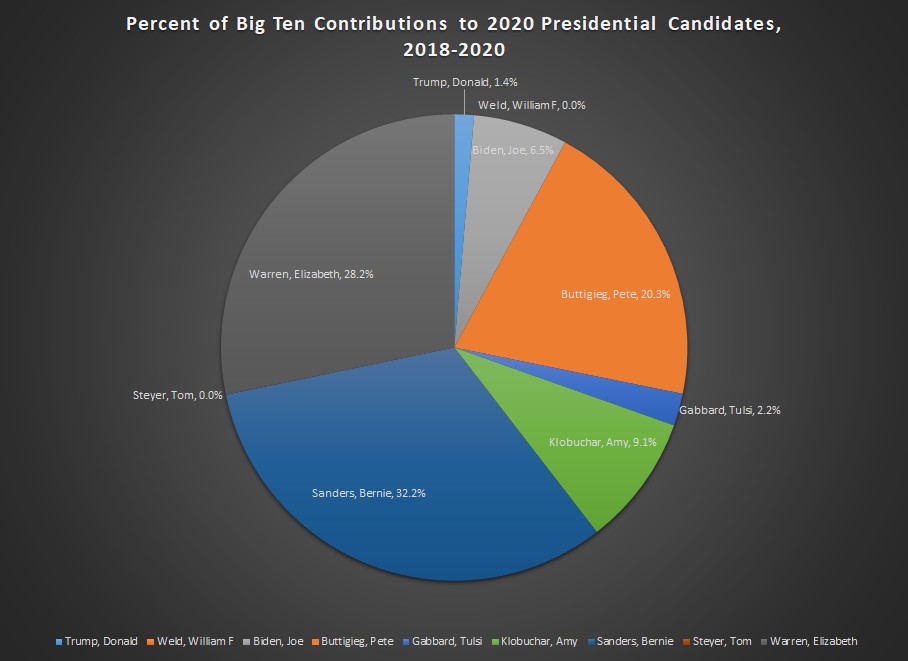