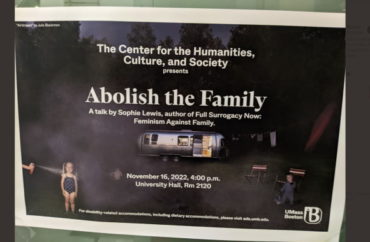 ‘Challenging the rhetoric of motherhood’

Hillary Clinton once famously wrote a book titled “It Takes A Village.” One feminist scholar is taking that argument one step further, arguing children should be raised by society rather than just their parents.

An expert on “feminist, trans and queer politics and philosophy,” scholar Sophie Lewis on Nov. 16 spoke at UMass Boston at an event named after her October 2022 book, “Abolish the Family: A Manifesto for Care and Liberation.”

Lewis has said in her various writing and interviews that her goal through “abolishing the family” is to reimagine the notion of the family past fatherhood and motherhood into a more universal sense, where children are not “property” of parents, but raised by society as a whole.

She spoke at UMass Boston at the invitation of the Center for Humanities, Culture, and Society.

Lewis, in an interview with The College Fix, said the center invited her given her “fearless and rigorous work breaking from traditional ways of thinking about institutions such as the family.”

“Let us overthrow, in short, the ‘family,’” its online description states.

Lewis has become something of an expert on the “Abolish the Family” concept.

“I suppose that I’m called to the challenge of thinking about these really difficult questions of how those intimate spheres are affected by capitalism and how they are political,” she said in an interview with Ben Smoke of Verso Books.

She described the concept as “infrastructures that would mean that the family was a domain of real choice or real freedom and you weren’t coerced into needing it so much.”

“We all deserve better than the family, Lewis argues, and it’s up to all of us to build new forms of solidarity and care that reach beyond biology or even kin, even if we don’t know quite what they’ll look like. Abolish the Family will make you want to find out,” one stated.

In response to a question from The College Fix about her theory, Lewis provided links to other interviews she has done.

Lewis, in her interview with Verso, said the “left needs to get a little bit braver also at challenging the rhetoric of motherhood.”

“Because a lot of the people who do mothering, I call them mother-ers to just ram home the point, that we can mother one another after the abolition of the family, this is what will hopefully be lifted up,” she said.

In her journal article headlined “Mothering against motherhood: doula work, xenohospitality and the idea of the momrade,” Lewis elaborated on her concept.

“To abolish the family is not to destroy relationships of care and nurturance, but on the contrary, to expand and proliferate them. Reflecting on the conditions of possibility for such universally xenofamilial – that is to say, comradely – kin relations, this article implicitly argues for utopia(nism) in feminist kinship studies,” she wrote in the article.

In her interview with Verso books, she further described children as being likened to “property” in modern culture, which is a facet of her rationale for a utopia-style familial ideal with no sense of individual parental relationships. 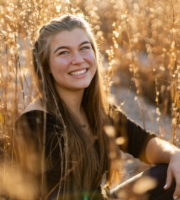