There appears to be a disconnect among progressives when it comes to the COVID-19/teaching narrative.

Initial concerns were — rightly — about the “equity” of virtual instruction: Minority/low-income students are less likely to have computers or computers unable to handle the programs needed for remote learning.

But instead of making the best of the novel situation, some school districts advocated against teaching at all unless students were guaranteed “equal access” to virtual lessons.

Months later, as the science more and more advocated a return to in-person learning, educators shifted to clamoring about how it actually isn’t safe for them (and students) to be in schools. One teacher even said the insistence upon going back to schools would allow “nice white families” to kill minority students.

However, new SFUSD School Board President Gabriela López didn’t think it a big deal, claiming minority parents were “doing an amazing job helping their students” and that “learning has not stopped […] it is just different.”

“They are learning more about their families and their cultures, spending more time with each other,” López said. “They’re just having different learning experiences than the ones we currently measure, and the loss is a comparison to a time when we were in a different space.”

“I absolutely am not dismissive of the pain we are feeling by [distance learning], and the value of in-person instruction. I see how trying to explain my thoughts around learning at home is tricky during this time,” she said. 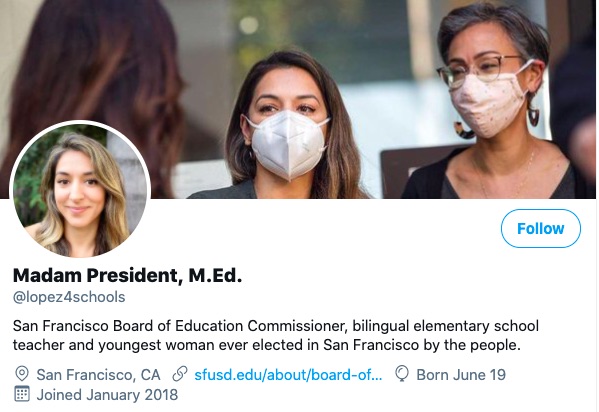 In response to being asked if she was quoted out of context, López responded “I’m not placing blame, just what I was highlighting is centered around the type of learning I feel is valuable in addition to what we provide in schools. Don’t want to dismiss how difficult it’s been for everyone though. At all.”

“We are failing them right now as a society,” she said. “This is families of color having the least secure housing, the least secure jobs. If you’re a parent and you’re worried about keeping a roof over the head of your child and putting food on the table, that’s going to take precedent over remote learning.”