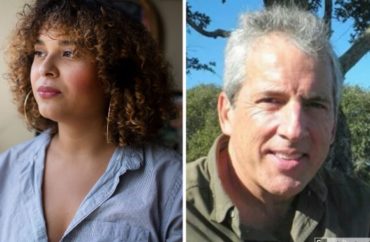 An ‘Amy Cooper’ campaign against Stop the Insanity at UT?

Two years ago, Mark Pulliam and Lauren Lluveras cordially debated each other at an event hosted by Common Ground for Texans.

The subject was “Freedom of Speech and the Right Not To Be Offended” (below). They shook hands and exchanged respectful remarks to one another afterward.

A few months later, the University of Texas alum and retired lawyer started a Facebook page, Stop the Insanity at UT, intended to expose his alma mater’s increasingly “radical agenda.” Lluveras, at the time a postdoctoral fellow at UT’s Institute for Urban Policy Research & Analysis, was immediately concerned by its content.

Whatever relationship existed between these professional acquaintances has now soured so much that Lluveras, who is again a doctoral student, is accusing the “white supremacist” Facebook page of “dog whistle politics.” Pulliam, in turn, is accusing her of threatening to dox his nearly 2,600 followers.

Both told The College Fix in interviews that Facebook had removed posts criticizing each other, or so they assume, in their recent tit-for-tat.

“I don’t want Mark to be de-platformed as much as he probably thinks that that’s what I would like,” Lluveras said in a Zoom chat. Rather, she wants him “to stop trying to make it more difficult for students of color and gay students to access the services that white students have always had at the university.”

It’s not a political issue, she continued: “Mark could have nothing but black and Latino friends and be a campaign donor to Bernie Sanders,” but “if he still ran a page like he currently does, I would call him a racist.”

Pulliam said he started the page because of his own concern about “this whole ‘wokeness,’ ‘progressive identity politics,’ ‘social justice,’ ‘speech codes,’ ‘Title IX,’ all of these things” that show UT’s leftward drift since he graduated.

“Call me a gadfly, call me a watchdog, or just a concerned alumnus, but I am just pointing out things that I think people ought to follow,” he said in a phone call, “and now I’ve got somebody on my case threatening me,” referring to Lluveras’s “dog whistle” post.

The University of Texas just wants to stay out of the feud. Asked if UT views its doctoral student’s comments as a form of intimidation or harassment, Director of Media Relations & Issues Management J.B. Bird replied: “UT Austin strongly values and protects free speech, which is a fundamental right of all people and central to the mission of the university.”

He declined to comment further on the specific content of Lluveras’s message, or on UT’s stance toward Pulliam’s Stop the Insanity at UT page.

A few months after their cordial debate in 2018, Lluveras took issue with Pulliam’s essay for Minding the Campus on UT’s return to “racial separation” via progressive activism. One of his examples was the UT institute where she was a postdoctoral fellow.

“I often feel jaded about this work & the permanence of racism, but then I get an email from” another Pulliam website “& realize that sometimes even just existing is resistance. & that’s pretty dope,” she tweeted: “Thanks, Mark, for reminding me that what I do matters today.”

Pulliam responded to the dig on Stop the Insanity at UT by questioning the law school graduate’s law credentials and calling her “insipid op-eds in local newspapers and national publications like Teen Vogue” an “embarrassing excuse for ‘scholarship.’”

The spat was mild compared to what happened late last month. Pulliam claimed that Lluveras’s May 27 post was threatening to get his followers fired in the same manner as Amy Cooper, the white woman whose reputation was destroyed after video showed her threatening to call the police on a black man in New York’s Central Park. 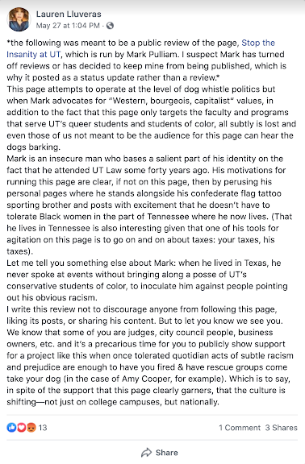 While Lluveras’s post (left) has since disappeared from Facebook, as has Pulliam’s warning to his followers (below), The Fix reviewed the posts while they were still live.

Now a doctoral student in the African and African Diaspora Studies program, Lluveras said Stop the Insanity at UT wouldn’t let her leave a “public review” of the page. She called Pulliam, a 1980 graduate of the UT law school, an “obvious” racist whose page only targets faculty and programs that serve “UT’s queer students and students of color.”

She looked through “his personal pages” to find a photo where Pulliam is standing next to his “confederate flag tattoo sporting brother.” Lluveras claims that comments he made on an article about the arrest of an African-American woman, for twerking half-naked outside an Austin grocery store, were racially motivated. The Ph.D. student also claimed he brought “a posse of UT’s conservative students of color” wherever he spoke to guard against racism claims.

“I write this review not to discourage anyone from following this page, liking its posts, or sharing his content,” she wrote, but instead, “to let you know we see you”:

We know that some of you are judges, city council people, business owners, etc. and it’s a precarious time for you to publicly show support for a project like this when once tolerated quotidian acts of subtle racism and prejudice are enough to have you fired & have rescue groups come take your dog (in the case of Amy Cooper, for example).

Pulliam responded in a post to his followers: “This [social justice warrior] clumsily threatens those who disagree with her … with retribution, by doxxing you and getting you fired, a la Amy Cooper.” (He noted the following day that his post had disappeared.)

“She actually said that you could end up like Amy Cooper and have your dog taken away,” Pulliam told The Fix: “I mean, who says something like that?” Lluveras is saying, in effect, “if you do something that we don’t like, we can make your life difficult by accusing you of the kinds of things that she is accusing me of.”

He predicted that Lluveras would realize her post looked foolish and delete it. Within 16 hours of that interview, Lluveras’s post was gone and Pulliam told The Fix that he could no longer view her account. Lluveras told The Fix she didn’t delete the post.

Both said Facebook didn’t notify them that the posts, and all the associated comments, had been deleted.

(In one comment on Pulliam’s page, Lluveras tried to convince a follower of Pulliam’s page, Mandy Park, that it’s “a white supremacist project.” Park should use the phrase “people of color” because it has more “dignity” than “minority,” Lluveras said.)

Lluveras said that she was not surprised that her post was taken down “given that it was branded like a threatening post.” All the pages for the removed posts read: “Sorry, this content isn’t available right now.”

‘Thug’ and ‘twerking’ have racialized connotations

Lluveras denied her post was a threat to his followers. “If I had the intention to dox anybody, I just would have done it,” she told The Fix.

She mentioned Amy Cooper merely to highlight that even a New York liberal could become a viral target, meaning “it can happen to anyone.” When there is “so much civil unrest around the subjection and brutalization of black people, I think it is precarious, and that’s why I used that word.”

Lluveras expressed confusion why “anyone would support” a page like Pulliam’s “in this specific moment, knowing that it has definite risks associated with it.” They can be associated with “a white supremacist, anti-black page.”

Asked if she imputed racism to Pulliam by mentioning his “confederate flag tattoo sporting brother,” Lluveras said the retired lawyer had earned that designation “based on his own actions.”

Regarding Pulliam’s comments about the African-American woman arrested for twerking, Lluveras said they were racially motivated. He had said such a thing “doesn’t happen at the local Food City here in eastern Tennessee,” where he moved from Austin.

The news article about the arrest doesn’t mention the woman’s race but includes her photo, which makes her race “integral” to the story, according to Lluveras, and “twerking” has “racialized connotations.”

When Pulliam called her a “woke thug” in response to her post, he was actually using a racial slur, she claimed, citing various linguists who argue that “after the Civil Rights movement, ‘thug’ came to replace the n-word, because the n-word fell out of favor.”

Pulliam “has to know” about the racialized connotation of the word “because he is obviously an intellectual person who does the reading,” and so do his followers because “thug” is widely used in the media, she said.

In response to the claims of racism, Pulliam remains astonished. The photo with his brother shows a “Stars and Bars on the fairing of his motorcycle,” he said: “That doesn’t make him a racist and that certainly doesn’t make me a racist by association.”

The nonwhite conservative “posse” whom Lluveras said he was parading around was actually crucial to Pulliam starting his website, he said. “Stop the Insanity at UT” was the name suggested by an East Indian undergraduate and chairman of the Young Conservatives of Texas chapter at UT.

By posting so often on identity politics and social justice, Pulliam is simply keeping up with the “various grievance studies Facebook pages” that UT operates, he said. He’s not highlighting “the physics department because it’s not doing crazy things.”

He simply wants to point his followers to UT figures such as Lluveras “who are intolerant of dissent, who do not like people monitoring what they are doing, and who resort to threats and name-calling.” She is a “committed social justice warrior” who knows the power of social justice mobs.

Lluveras may see racism in a broader sense than Pulliam. The more “insidious” and “important” form is institutionalized racism, which Stop the Insanity at UT promotes by targeting “programs that cater to black, Latino, Asian and gay students,” she said. “To me, what Mark does is question my humanity and the humanity of people I love.”

For Pulliam, his Facebook page simply illustrates that “sunlight is the best disinfectant.” And he hopes his efforts lead to UT becoming more like Purdue University, which still upholds the core purpose of higher education: “to be exposed to different ideas, to debate ideas, to have ideas be tested in the marketplace of ideas.”

MORE: Fed up alum starts ‘Stop the Insanity at UT’