The direct financial burden of social justice general education requirements is at least $10 billion a year nationwide — and rising fast — according to a report released Friday by the National Association of Scholars.

That’s just one detail among many in the 275-page “Social Justice in Education” study authored by David Randall, director of research for the right-of-center academic association.

The report “aims to catalogue the extent of social justice education, and the way it has seized control of the machinery of higher education.” 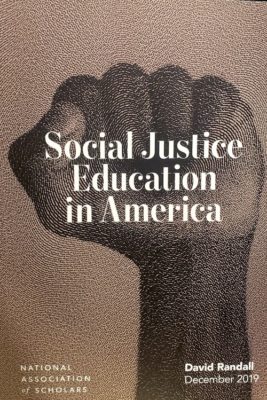 Universities nationwide require students to take a course that falls under the social justice umbrella, such as a diversity, multicultural, sustainability or experiential learning class, Randall said as the association debuted the report at the John Locke Foundation in Raleigh, North Carolina.

To determine the $10 billion figure, Randall said he put the estimated cost of one required course under the social justice umbrella at $2,000 and applied that cost to students nationwide.

“That was trying to be unbelievably conservative,” Randall said of the figure. “We make no attempt to talk about how much it costs to pay for each dean of community engagement, each advocate for sustainability. Our next report on administrative growth will cover that. But the true figure must be much, much higher. That was trying to give an absolute bargain basement estimate.”

The report focuses on 60 colleges and universities, both small and large, public and private, to hone in on how higher education has been transformed into “training camps for progressive activism.”

Even the hard sciences are no longer insulated.

“It’s coming into the sciences,” Randall said, noting that one section of the report focuses on math.

The advancement of social justice in higher education is accomplished through “four broad strategic initiatives,” according to the report.

In addition to general education requirements, university mission statements have been altered to prioritize social justice, social justice advocates have aggressively flooded academic departments, and they’ve also taken over administration, in particular co-curricular divisions such as offices of student and residential life.

Randall, is his talk about the report, emphasized that this social justice onslaught has overtaken higher education “in just one generation.”

“University presidents sell social justice to the public as all-American niceness,” he said. “The Federal Trade Commission ought to book them for false advertising. … Social justice in America in 2019 means the radical, secular theory that ordinary American life is so oppressive that we must dedicate ourselves to liberating others from that oppression.”

The report offers reforms to disrupt the social justice advancement, such as to remove the topic from undergraduate general education requirements and departments that provide employment credentials, eliminate the co-curriculum, and remove social justice requirements from higher education job advertisements.

Asked during the Q&A if there’s a “remnant” of professors and administrators on campus who might be willing to help stem the time, Randall said he was not optimistic.

The heaviest concentration of students and graduates of the emerging social justice education are the human resource directors and professors and K-12 teachers of today, and young people from kindergarten up are taught under the social justice mantra and never given an alternative view.

“Parents must refuse to pay for social justice courses,” it states. “Trustees at private colleges and universities must exercise oversight and remove social justice advocates from the administrations. Education philanthropists must condition their financial support for higher education on the elimination of social justice advocacy. Businesses and nonprofit organizations must weigh in to demand that higher education cease to operate as an extension of progressive politics. They must also cease to create social justice jobs in the private sector, such as human resources positions dedicated to diversity.”

“All citizens must express their desire for higher education reform that purges social justice advocacy from our universities.”

The report was debuted at an event co-hosted by the Raleigh-based James G. Martin Center for Academic Renewal.